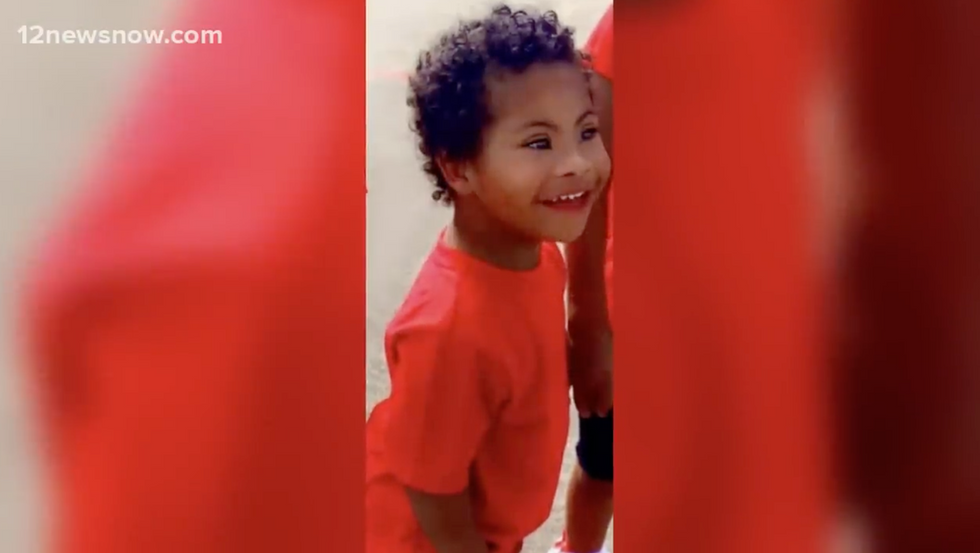 Texas police said this week a 3-year-old boy with special needs “looked like a skeleton” and weighed just 19 pounds at the time of his death. The little boy, King Dewey, was emaciated on Tuesday and found padlocked in a cupboard at his Port Arthur home. KDFM TV reported.

Both his mother and sister have since been arrested and charged in connection with his death, and now police are looking for a third suspect in the case, 24-year-old Jaylin Lewis, who she characterized as an acquaintance of the two women.

Tina Louis, 43, and Kirsten Louis, 21, are currently being held in the Jefferson County Jail on two counts of injuring a child for damage they allegedly caused to King and another unidentified sibling.

Mike Hebert, Port Arthur Police Detective said KBMT-TV that King’s death was difficult for many of the officers charged with handling the case.

The detective said police were alerted to the boy’s condition by a family member early Tuesday morning. When officers entered the home on Richmond Avenue, they made the horrifying discovery.

“They noticed a cupboard that was padlocked,” Hebert said. “You walked into this closet and it was bug infested and in a dirty state. Investigation would show that Baby King was placed in that closet.”

“It’s hard to understand what happened in the house,” he added, noting that the boy appeared to be suffering from severe malnutrition and had a “skeletal appearance.”

“I can’t even begin to imagine the horror this kid went through. I’m just speechless,” said Hebert.

According to prosecution documents, Kirsten, who posed as King’s caretaker, said when speaking to police that she observed the boy’s weight loss and was concerned. But she claimed that when she told her mother, she reassured her his weight was normal due to his Down Syndrome diagnosis. Tina reportedly told her to only feed him milk and vitamins.

Kirsten eventually listened to her mother and neglected to contact the police or emergency services. She told police investigators that she did not contact authorities because she was concerned child protection services would remove her other siblings from the home.

The mother, Tina, later reportedly admitted to police that King had not received proper health care for the past nine months.

Both women are being held on $1.5 million bail.

Two other siblings living in the household were placed with relatives.

https://www.theblaze.com/news/special-needs-3-year-old-emaciated-skeleton Police say the emaciated 3-year-old boy with special needs weighed just 19 pounds at the time of his death and “looked like a skeleton”.