This weeks quantum leap offered a more historically accurate depiction of the Wild West when Ben found himself in the body of a Mexican-American gunslinger named Diego de la Cruz in 1879.

Diego-turned-pacifist was tasked with rescuing the small town of Salvation from a group of outlaws – led by the menacing McDonough – bent on claiming the nearby railroad. The mixed-race townsfolk, which included bar owner Frankie (Yaani King Moonlight) and Diego’s granddaughter Valentina (Nicole Alvarez), refused to give up the home, which offered them opportunities they wouldn’t find anywhere else. Ben had to stop the outlaws from forcing the locals to sell their lands without shedding blood.

In the present, the team was busy hiding evidence of Ben’s jump from Congresswoman Kavita Adani (Farah Merani), who stopped by their headquarters to inquire about suspicious activity. While Ian and the others didn’t reveal any vital information, Kavita was still on the verge of finding out what was really going on. At this point, Jenn dug up retirement information as a last resort should Kavita’s curiosity ever threaten the Quantum Leap project.

In the end, Kavita Magic revealed that she knew about Ben’s unauthorized jump all along. She gave the team a chance to come clean, but since they didn’t, she believed the project was compromised and out of her control. She would tell the superiors.

However, Magic convinced her not to do so, revealing that they could go back in time and save her brother’s life. The team knew that was impossible – they can’t target a specific time – but the most important thing was that Kavita believed that lie. Magic only bought them more time to try and get Ben home.

As early as 1879, Ben got the townspeople to use clever traps to catch the infamous outlaws without having to kill anyone. This allowed them to collect the reward money and keep the railway company off their backs for the time being. And thanks to Ben’s tip about copper nearby, Salvation became a booming town again. 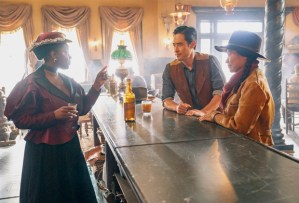 When Ben decided to return to Addison so they could start over and build new memories, the couple was interrupted by one of the townspeople who somehow knew Ben’s true identity.

“You miscalculated badly when you came here, Ben,” the stranger snapped. “I know all about you, Dr. Ben Song from 2022. I know what you’re doing but if you value your life you need to stop following me. Do you understand?”

However, before a confused Ben could answer, he jumped into the nearest body.

Since Ben encountered another knight, that means quantum leap just introduced the Evil Leapers? In the original show, the Evil Leapers came from a secret organization trying to violate every right that was made and working against the Quantum Leap project. The corrupt project was directed by Lothos, who was Ziggy’s evil counterpart.

When TVLine spoke to showrunner Martin Gero in September about the possibility that we could see Evil Leapers on the series, the boss teased, “You just could.”

So what do you think? Was that an Evil Leaper this week? quantum leap? Why do you think Ben was chasing him?