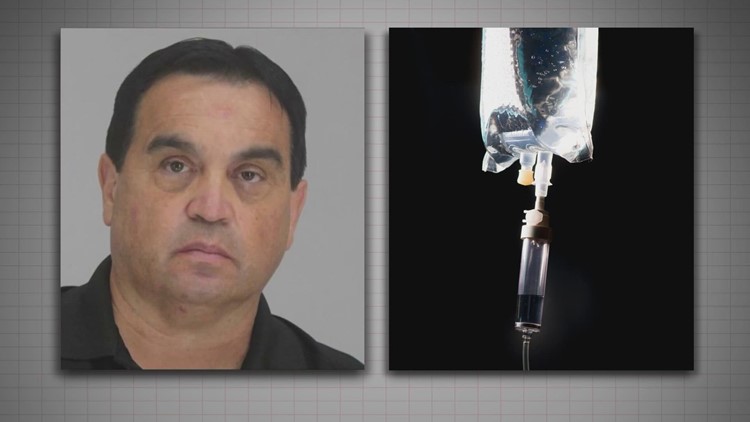 A lawyer for Ortiz questioned the seriousness of the complaints, noting that her client was still able to keep his job.

DALLAS — An anesthesiologist accused of tampering with IV bags at a North Dallas surgery center had previously been contacted more than 30 times about problems at another clinic, but was able to keep his job, according to testimony at a federal custody hearing on Friday .

The nature or seriousness of the “incident reports” against Dr. Raynaldo Ortiz was not detailed Friday, but Jeremy Johnston, the former director of surgery at Dallas Regional Medical Center in Mesquite, said the number of work-related complaints was high for a single doctor to receive in a three-year period.

A lawyer for Ortiz questioned the seriousness of the complaints, noting that her client was still able to keep his job.

“He’s friends with the CEO, so they haven’t done anything,” Johnston testified.

“Due to the ongoing criminal investigation into Raynaldo Ortiz Jr., we are unable to provide any further information,” said Vince Falsarella, spokesman for the Dallas Regional Medical Center. “The health and safety of our patients is always our top priority. Our facility has received the Healthgrades Patient Safety Excellence Award for the last three years, placing us in the top 5 percent of all short-term acute care hospitals in the country according to Healthgrades.”

Prosecutors said an anesthetist died at home after receiving one of the tainted bags, and 11 other patients at Surgicare North Dallas had major cardiac events after receiving fluids from other bags.

RELATED: EXCLUSIVE: ‘All that stuff…was a lie’ | In a prison interview, the North Dallas doctor denies he poisoned IV bags

Ortiz has pleaded not guilty. In a phone interview with WFAA from prison last month, Ortiz said he did nothing wrong.

“All that stuff they said was a lie,” Ortiz told the WFAA.

Prosecutors said the poisonings began after Ortiz was upset that North Dallas Surgicare administrators opened an investigation in May into alleged failure to act when a patient stopped breathing during surgery. At the time, he was being investigated for another similar incident at Baylor’s North Garland Operations Center, for which he was later disciplined by the Texas Medical Board.

Johnston, who testified under court order Friday, said he was personally scared of Ortiz after the doctor yelled at him and punched him in the chest during an argument at work at Dallas Regional Medical Center in Mesquite.

“He is vengeance. He’s aggressive,” said Johnston, who now works at Baylor Scott & White’s North Garland operations center, where Ortiz used to work. “My entire facility is scared to death. They said he could shoot us. I’m afraid for my wife and children.”

Special Agent Daniel Allgeyer of the US Food and Drug Administration, the lead agency investigating Ortiz, said several witnesses have said they also fear that Ortiz will harm them if he is released.

He said one was a nurse at the North Garland Operations Center. He said she told investigators that on December 23, 2020, Ortiz verbally abused and yelled at her after she called for emergency help when a patient in Ortiz’s care stopped breathing.

Allgeyer also testified that Ortiz may have had access to millions of dollars from his medical practice, which he could use to flee the country if released.

Ortiz’s attorney, John Nicholson, argued that Ortiz was not dangerous, had a young son, had no criminal convictions on his record, and had every incentive to comply with any restrictions the judge would place on him.

“With all due respect, I disagree with the defense,” said US District Court Chief Justice David Godbey, who ordered Ortiz to be held pending trial.

“The defendant is a danger to the community, his associates and potential witnesses,” the judge said.

Ortiz is expected to face trial sometime next year.

The mayor of Dem, who used taxpayers' money to buy first-class airline tickets to Europe, is under fire again for spending $225,000 on security services and a personal stylist