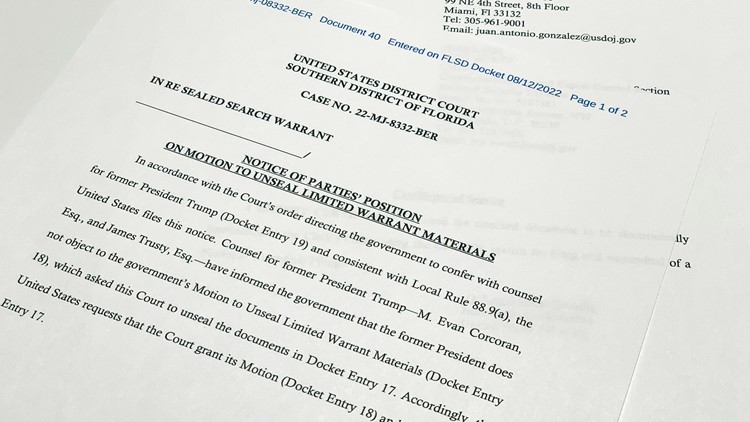 The unsealed documents show that FBI agents took away 11 sets of classified records from Monday’s raid.

WASHINGTON — A Florida judge unsealed the FBI’s search warrant to search the home of former President Donald Trump in Mar-a-Lago on Monday.

FBI agents seized 11 sets of “top secret” records from Mar-a-Lago, according to the property receipt obtained by multiple news outlets. Federal agents use property receipts to indicate what will be taken during a search.

The unsealed documents contained no details or information as to what secret records contained. In a statement Friday, Trump claimed that the documents seized by agents at his Florida club were “all declassified,” arguing that he would have turned the documents over to the Justice Department if requested.


The decision to unseal the warrant comes after Attorney General Merrick Garland called for the warrant to be released after Trump confirmed the search to the public. Trump’s lawyers had no objection to the proposal to make the documents public on Friday.

In messages published on his platform, Truth Social, Trump wrote, “Not only will I not oppose the release of documents… I’m taking it a step further by ENCOURAGING the immediate release of these documents.”

The search warrant for Mar-a-Lago, served Monday, was part of an ongoing Justice Department investigation into the discovery of classified White House records seized at Trump’s home in Palm Beach, Fla., earlier this year.

The National Archives had asked the department to investigate after saying 15 boxes of records it retrieved from the estate contained secret records. Several federal laws regulate the handling of classified information.

Florida airport workers accused of stealing over $16,000 in bags