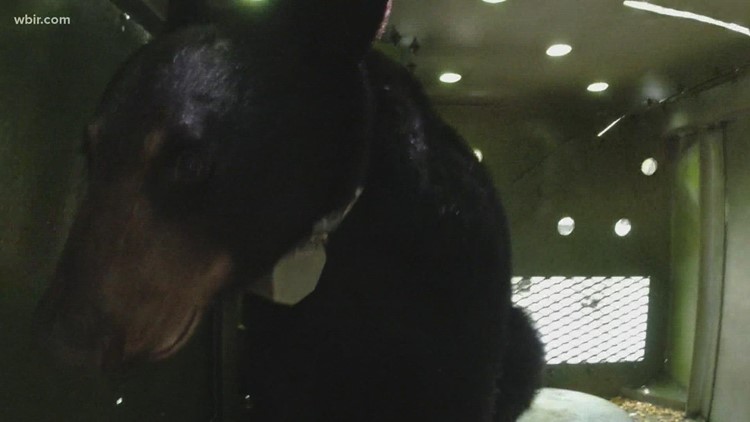 She eventually crossed I-40 and returned to the Great Smoky Mountains, where she ended up at the same campground from which she was captured.

She was brought to the South Cherokee National Forest in Polk County, Tennessee, with a GPS collar that recorded her movements as part of a study the park was conducting on translocated bears.

The aim of the study was to understand what happens to bears that are relocated outside the park. Prior to the study, GSMNP believed that a small proportion of the relocated bears were hit by cars or harvested, and many returned to their original home base.

“For 74%, we weren’t sure what happened to them,” said Bill Stiver, wildlife biologist at GSMNP.

They have had collared bears for about 40 years since this particular study began, including the female bear that was translocated to the Cherokee National Forest – number 609. She was the most interesting female bear of the group.

Wildlife biologists found she traveled 1,000 miles through Georgia, South Carolina and North Carolina before returning to Tennessee. She eventually crossed I-40 and returned to the Great Smoky Mountains, where she ended up at the same campground from which she was captured.

“It was definitely one of the most bizarre movements I’ve seen so far,” said Bill Stiver, one of the wildlife biologists who tracked them. “She never let up. She just kept going”

The bear didn’t stop at the campsite either. She migrated back to Alpharetta, Georgia and found some fame. News agencies in that area spotted them sifting through trash and Walking in a mall in the area.

“This bear was actually hit by a car in Georgia, but it didn’t kill her,” Stiver said.

She finally ended her journey somewhere near Cherokee. Stiver said they hadn’t received any data from her in about two weeks, but the park believes she is still alive.

After traveling to Alpharetta, the bear ventured into the Anderson, South Carolina area. There, family members of a GSMNP employee were able to see the bear in action.

“This particular bear had a personal connection with some of my family members,” said Lisa Mcinnis, director of resource management and science.

“My boss’s brother got this picture, and it was taken in his neighborhood,” Stiver said.

“They live in Anderson, South Carolina, and my brother showed me a picture of the bear. I asked Bill, ‘Do we have a bear in this area?’ And he said, ‘We definitely do,'” Mcinnis said.

The whole course fascinated Bill. He said he checks the maps daily to monitor new activity. It has taught wildlife biologists a lot about bears.

“The overall picture is that about two-thirds of the bears that moved will be dead in about four months, and that’s preliminary data. And we have another year of research,” Stiver said.

The park said their journey was the longest stretch the park has ever seen by a bear. Before this bear set the record, another bear had walked about 215 miles in 2020.

Stiver wants people to know that the park doesn’t want to euthanize or relocate bears.

“Once the bear’s behavior escalates to a certain level, there aren’t many options to either move it or put it to sleep, and we’ve been moving it for years,” Stiver said.

However, one thing people can do to help make the Smokies a safer place for people and wildlife is to be BearWise.

The Great Smoky Mountains also urged people to stay “BearWise” and take action to prevent bears and visitors from being injured in the park. Below are six tips on how to do this Stay BearWise: