After her move to California was delayed due to car problems, a creepy white man and lack of money, Elora landed back on the rez just in time to say goodbye to her dying grandmother. As death knocked on her door again, memories of the loss of her mother and Daniels resurfaced, creating a tornado of difficult and conflicting emotions.

Devery Jacobs, Elora’s cast member, co-wrote the episode with series creator and executive producer Sterlin Harjo. As she tells TVLine, it was crucial for the episode to highlight exactly how indigenous communities say goodbye to their departed. Below, she talks about what prompted her to co-write Episode 4 and unfolds the wealth of emotions her character experiences throughout. She also details the episode’s portrayal of Indigenous traditions, including the meaning behind the spirit plate and why Oklahoma is such an important part of the Rez Dogs’ DNA.

TVLINE | How did the screenplay come about and have you always wanted to write for Elora?
DEVERY JACOBS | I knew I wanted to be a part of the writing room. I wanted to voice all of the characters and help shape the season, and I feel like I was able to do that. We had figured out what the episodes would be, and Sterlin assigned different episodes to different writers based on our personal connection and experience. For this episode, it was particularly important to me to show death in essence, but through the lens of our communities. I feel like it’s a really different, hands-on experience compared to western cultures. I’ve been to a few white funerals in my life, and they often feel distant and a bit more isolated and somber. Talking about death is something taboo, while someone who grew up on my level sees death and is a part of it, the coffin is always open. (Of course, there are exceptions when the person left tragically or before their time.) But when someone dies of old age and is surrounded by community, these make for some of the funniest parties and a beautiful, heartfelt experience of graduation at the end. I spoke about it so passionately that Sterlin asked me to co-write this episode with him, which I found really intimidating! I don’t think I was ready to write for myself.

When it came time to shoot it and be directed by Danis Goulet – who I thought handled the episode so carefully – we had a great conversation about how we wanted to honor each other’s artistic vision for it. I said to her, “I take off my writing hat and hand you this script in full. I’m so excited to see what you make of this and now is my time to focus and look at the story differently than Elora did.” I’m so proud of it, both as a writer and as an actor.

TVLINE | Which cultural traditions did you want to take into account when writing?
In terms of the songs sung, I left that to Sterlin because I’m Mohawk – we have different traditions than Muscogee and Seminole communities – but I think the element we wanted to convey was the coming together of the community and the journey within that we say goodbye to people. That was something we felt was very important. As I got more specific, I think it became universal because everyone has family members who have died and everyone knows what it’s like when families get together and old memories resurface. But for us it was important to bring our specific tastes and the way we do things to the episode.

TVLINE | Elora seems a bit dazed at the beginning of the episode. What’s on your mind at the beginning of 2X04?
Elora Danan is overwhelmed. She is frozen in fear because her previous experiences with death were not necessarily positive ones, as is the death of her grandmother Mabel. Her experiences of death affect Cookie, her mother, and Daniel. So for them, an important healing experience is for them to experience death “the right way,” meaning that it is of natural causes and surrounded by community. And so, from the start, she has to take on the role of responsible adult, caring for the people in this room while trying to grieve at the same time. It offered her a complex space to navigate. We wanted to make sure there was room for all the nuances and all the feelings she’s experiencing. 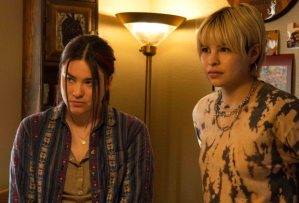 TVLINE | Can you tell me about the significance of the dinner plate that Elora Bear is asking to bring home?
Yes! We have ghost records in all of our communities. It depends on the community, but there are different ways to do it. A ghost plate is a plate of food where you have a bite of each food and leave it out for the ghost to feed as well. It honors the people who have left. In my church there is also a plate for the person who passed. But we all have our own version of a ghost record, and these details show how we deal with it. We just broke hell in the writers’ room. “Yeah, you skip the liquor plate and then William Knifeman comes and eats it!” It was like…LOL!

TVLINE | Bear and Elora find themselves at a very interesting crossroads in their friendship. What’s up with those two?
Even though they show up for each other because they love each other, that doesn’t mean they’ve spoken through and been able to make amends for the things that happened. I don’t know if Bear and Elora will ever fully heal, but they still love each other. I think that’s why it’s such a beautiful relationship, one where they also love to butt heads.

TVLINE | Elora tells Jackie they’ll be back on the road soon, but it seems her heart isn’t in it anymore. Is that what she really wants?
I think when Elora and Jackie left for California, Elora thought that she would find much more relief and recovery from all of these negative feelings and memories that she has from finding Daniel and from losing Daniel. Her desire to go to California was so ingrained that she couldn’t imagine it [home] without him. As she embarked on her wild adventure, all of these memories closed in on her. The guilt she feels for leaving Bear and her friends, and the need for that sense of community, has shown her that California might not be exactly the place she thought it would be for her. I can’t say exactly where Elora will end up, but there are definitely doubts about what California means on her journey.

TVLINE | Aunt Teenie tells Elora how she left the reservation and what she did with her life. Did this conversation give Elora hope or motivation?
Elora’s feelings for Teenie are complicated. We wanted to make sure we made space for all of the things Elora was feeling, including anger and resentment that this person who should have been in her life wasn’t. Another reason is that she’s looking at this older friend group who’s been through something similar. Seeing the impact this break had on her group of friends gives her a glimpse of what her future with her friends could be if she were to leave. Elora meets for the first time with someone who has decided to leave her community but is still connected. It shows her a different way of life. So all these things happen. It’s a big mess of feelings for her.

We wrote this role specifically for Tamara Podemski. There wasn’t anyone else who could play teen and I’m so glad she could. What she was able to bring to the character was so perfect. Also, she had to perform opposite Sarah Podemski, her younger sister, and we could see that relationship bleed through. In the end it was really something special.

TVLINE | The rest of the Rez Dogs really don’t seem to like Jackie. Will she ever become part of the core crew?
We must see! I will say that specifically for Willie Jack I think that much of her resentment towards Jackie is almost a deferred anger towards Elora. Because Elora’s grandmother passed away, her circle of friends can’t necessarily be angry with her. They show up to support her. But much of that betrayal and anger is projected onto who Elora left with.

TVLINE | To wrap up, can you tell me a little about the importance of filming on location in Oklahoma?
There was nowhere else we could shoot this show but in Tulsa and Okmulgee, the capital of the Muscogee Reservation. We’re shooting during tornado season, it’s hot, it’s cold, everyone gets ticks…it’s an immersive experience! It’s such a special part of the world, one with people who are so resilient.

Before we shot the pilot, Sterlin ran us through what happened to the trail of tears. Originally his nation was more centered around the Atlanta area and the Southeast, but they were forcibly evicted to Oklahoma. Because of this, it became such a center for indigenous people of all nations. Normally we are spread out a bit further. If you travel to Oklahoma, there are about 39 different nations and tribes within a small radius. In the end, it becomes a truly collaborative experience. With so many Indigenous crew members on site, we couldn’t film anywhere else. It’s so embedded in our show and it’s a character in its own right.