One thing about Arondir? He will come prepared. Adar learned this the hard way in Episode 6 of The Lord of the Rings: The Rings of Power.

When the orcs stormed the watchtower near Tirharad, they encountered a series of booby traps set by the wood elf. Arondir boxed the creatures in and then brought down the tower on them, buying the villagers some much-needed time to return home and prepare for battle.

Meanwhile, the Númenóreans were sailing closer to Middle-earth, and a restless Isildur tried to catch the first glimpse of land. Galadriel approached him on deck and inquired who he was and why he wanted to be a soldier. “I was just trying to get as far away from this place as possible,” he told her. He didn’t think the island kingdom was that real Númenor and wondered if it ever existed. But Galadriel confirmed that it existed and still exists in his heart. She then asked Elendil how Isildur’s mother died, and he revealed that she had drowned.

As the southerners prepared to defend their village, Arondir attempted to destroy the ominous hilt. When that proved impossible, he chose to hide it instead.

Do you remember the Alfirin seeds Bronwyn gave to Arondir in Episode 1? In a romantic gesture, Arondir gave her one to plant before the battle and planned to plant the rest afterwards. That was his promise to start a new life with her and Theo when this was all over. 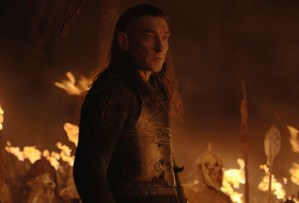 As night fell, the orcs marched on Tirharad and battle ensued. Arondir fought a large, muscular orc (in dire need of good conditioning) who didn’t even flinch when he was poked in the eye. With the knife now pointed at it his Eye – and orc blood all over his mouth – the elf was nearly blown to death, but then Bronwyn rushed in to kill him at the last second. And when the dust settled, the southerners celebrated their supposed victory… until they realized they had killed their own people. These were the men who left to join Team Sauron.

Adar waited in the forest, and arrows rained down on the villagers as his forces appeared. Bronwyn was hit in the shoulder, and Arondir barely made it through the tavern walls with her in his arms. She lost a significant amount of blood and was barely conscious, forcing Theo to cauterize her wound.

While the orcs pushed through the doors of the tavern, Galadriel, Halbrand, and the Númenóreans raced through the land on horseback. But would they make it to the southerners in time?

Things were not looking good for the villagers. Orcs began slaughtering those in sight, and Arondir was captured to be questioned by Adar about the hilt. Arondir refused to give it up, and the orcs slew more southerners. The next time Adar threatened to assassinate Bronwyn, Theo relented and retrieved it from a hiding place in the ground.

This was the perfect time for the Númenóreans to arrive on horseback. Reflects Gandalf’s arrival in Helm’s Deep with legions of Rohirrim The Lord of the Rings: The Two Towers, the seafarers rode through Tirharad to help the southerners repel Adar’s forces. Isildur even joined the fight and was no longer just a stable sweep.

Galadriel chased Adar and Halbrand followed them into the forest because he had a score to settle. When Halbrand had Adar right where he wanted him, he asked Adar if the orc leader even remembered him. Spoiler alert: not Adar. This angered Halbrand and he nearly drove his spear through Adar’s throat, but Galadriel stopped him. Has Halbrand lost his wife? Or a child? That seemed personal.

Galadriel then interrogated Adar and recognized him as one of the first elves that Morgoth had kidnapped and mutilated into orcs. Adar preferred the term Uruk (not to be confused with the much stronger Uruk-hai created by Saruman in the Third Age and bearing his white hand-drawing).

He explained that Sauron was dedicated to “healing” Middle-earth after his master’s defeat. The Dark Lord sought power, but something was missing: a shadow of dark knowledge hidden from him. Adar said he scared enough of his “children” for Sauron’s pursuits and claims to have killed Morgoth’s apprentice. Galadriel didn’t think so, of course. Despite this, Adar continued to tease her, and it was Halbrand’s turn to prevent her from killing the Uruk leader.

In a tender moment, Galadriel urged Halbrand to forget what he had done in the past and to rid himself of that guilt. Halbrand, on the other hand, admitted that to this day he never thought it possible to fight alongside her. And guess what? Galadriel felt it too. The mood is Swing.

United, the Soutlanders and the Númenóreans all celebrated their defeat at the hands of Adars Uruks. And when Bronwyn—glancing at the symbol Halbrand wore—recognized him as her promised King of the Southlands, he finally claimed that title.

However, this was not a real victory. The cloth that carried the coveted handle was just a lure. The real one was planted in the ground beneath the stone wall, which featured a carving of Morgoth’s face. The hilt was a key that opened powerful dams that allowed water to lap through underground tunnels and into the nearby volcano. This triggered a catastrophic eruption that ejected ash, smoke, and flaming debris into the air and landed on the village. (Hint: do we think this is Mount Doom?)

As everyone ran for cover, Galadriel stood his ground and watched the chaos and destruction. Adar escaped during the commotion and Galadriel was last seen being engulfed in the fiery smoke.

How have you been feeling this week? rings of power? Do you think Halbrand really is the king of the southerners? Write a comment below.