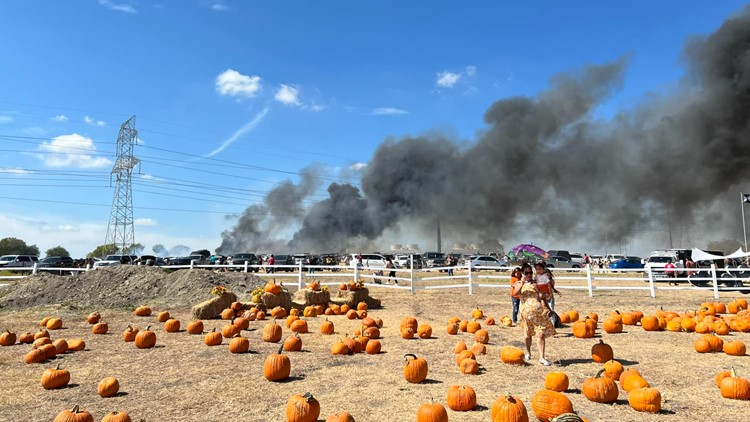 The farm reopens to the public after a fire that destroyed over 70 vehicles.

TEMPLE, Texas — The Robinson family farm has officially cleared to reopen its doors and it will do just that on October 22nd.

After a wildfire on Saturday, Oct. 15 destroyed more than 70 vehicles parked at the farm, the Bell County Fire Marshal has officially given them the green light to reopen, the Robinsons say.

There’s still no official statement as to what caused the fire, but officials have reportedly deemed it safe to return for the farm’s celebrations. Helen Robinson said she was told the fire was caused by an improperly discarded cigarette.

The farm, known for its pumpkin patch, was in the middle of its fall festival when the fire broke out, and the event was suspended until further notice after the fire.

The Robinsons thanked them Facebook site, thanked their patrons for their continued support. They will reopen for the remainder of the festival from Saturday October 22nd.

The Robinsons will not be held responsible for the fire and are reportedly doing whatever they can to help those who have lost their vehicles or belongings to claim insurance and get as much back as possible.

All tickets used on the Day of Fire, October 15th, can be redeemed on any day of the festival for the remainder of the season. Also, an extra weekend has been added to the Fall Festival to give guests another opportunity to enjoy the farm.

Tickets can be purchased at a reduced price from therobinsonfamilyfarm.com.

A sordid survival thriller escapes through the forest to Streaming Sanctuary

My nephew's wedding tore my family apart - what should I do?