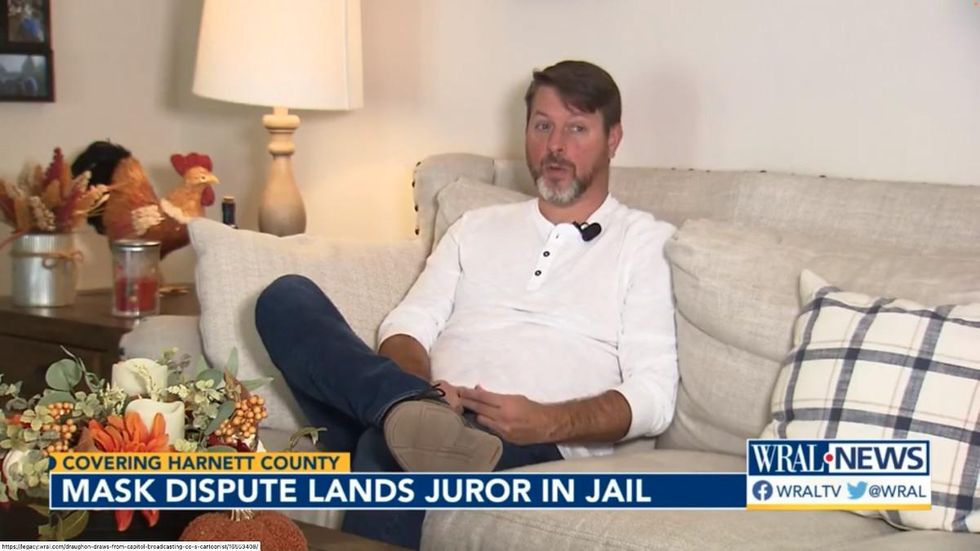 A judge in Harnett County, North Carolina, has jailed a man for showing up for jury duty without a face mask.

Gregory Hahn, 47, has been jailed for contempt of court after refusing to wear a face mask in Judge Charles Gilchrist’s courtroom. Gilchrist is reportedly the only judge in the county to have implemented a mask mandate.

On Monday, Hahn appeared for orientation with 98 other people who were summoned to jury duty. He says there was no notification prior to his appearance on Monday that the jury would have to wear masks.

“There were signs saying no masks were required,” Hahn told local news station WRAL TV. “We all went in.”

According to court clerk Renee Whittenton, everyone in Gilchrist’s courtroom must wear a mask, and the jury was informed of this requirement at check-in.

“You can go into any county courtroom without a mask, you can come into the Superior Court without a mask and that [district attorney’s] Office without a mask, but with Judge Gilchrist he has a mandate that you must wear a mask,” Whittenton told WRAL.

The clerk said any juror who didn’t have one was provided with a mask to wear.

But Hahn said potential jurors were not briefed on the mask requirement. Nothing was noted on his summons. And there is no signage inside the courthouse to indicate that masks are required.

Hahn said the judge asked him again if he would refuse to wear a mask in the courtroom. He told Gilchrist that was correct.

Hahn was then handcuffed, booked and sent to prison without obligation for contempt of court.

“I never thought something like this could happen in this country,” Hahn said.

Harnett and Lee Counties issued a joint order on March 10, 2022 that allowed the presiding judge in each courtroom to use their discretion to determine whether masks are required, WRAL reported. Masks are optional in hallways, foyers, restrooms, meeting rooms, and other areas in the courthouse.

Hahn said he asked the judge if he could be excused as he has one day in jail.

He recounted that Gilchrist said, “I could, but I won’t.”

Hahn, a single father, also asked if he could call his son at home. The judge declined, Hahn said.

“I was speechless,” said Hahn. “I felt it was bullying”

He told WRAL that his 24 hours in prison were the worst of his life and accused the judge of bringing his personal beliefs into the courtroom.

“I’m locked up for doing my civic duty and doing nothing,” Hahn said. “It’s stunning.”

He added that the judge acted hypocritically and told WRAL he was considering filing a lawsuit.

“The irony of this whole thing is that the judge spoke to me without a mask,” Hahn told WRAL.

Ukraine reveals how many missiles Putin has left: 'Defeat is inevitable'