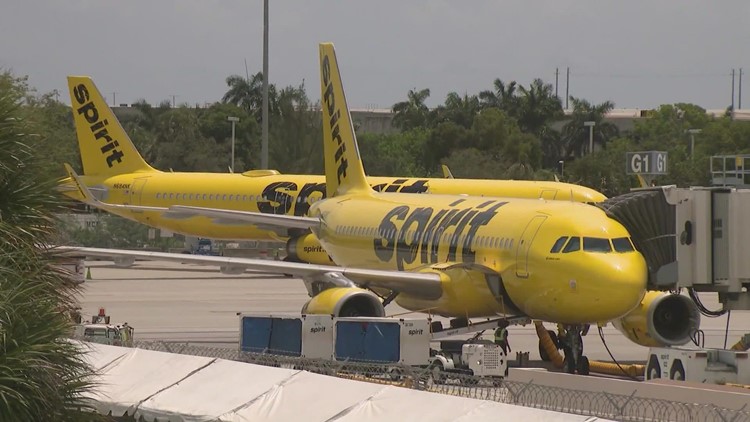 The airline and airport told WFAA that they are aware of the incident and will not tolerate violence of any kind. They added that they are cooperating with law enforcement.

DALLAS-A Spirit Airlines Agent, who the airline says is employed by a local partner company, has been suspended after video surfaced online showing him fighting a woman who accused him of being racist and homophobic at Dallas-Fort Worth International Airport (DFW). referred to as insults.

A video of the fight was posted on Twitter by DTX Daily with the date “7/11/22,” but Spirit’s statement confirmed the incident occurred on August 11 and not July 11.

Thomas Shannon shot the original video and posted it on his Instagram page. He is a professional cameraman and filmmaker. He said he frequents airports and travels the world.

“I’m on the Panda Express,” Shannon said, describing where he was staying before the incident. “We hear screams. I just drop my food on the counter, run over as fast as I can to see what’s going on. My first instinct was to just grab my camera and see.”

That Video has gone viral onlinewith more than 5 million views in just 24 hours.

In the video, a man in a maroon shirt — the airline employee — can be seen yelling at a woman and saying, “You’ve lost your mind… don’t ever touch me in your life.”

“You touched me first and then you went in my face,” the man added. “Never invade my personal space.”

The woman then yells at the man, “Get out of my face” while shoving him multiple times. Throughout the video, the woman insults the man with racist and homophobic slurs. Another man intervenes, then the woman hits the airline employee. In response to the punch, the man runs after the woman and eventually smacks her on the back.

“I think we need to have a dialogue about physical violence and safety at the airport,” Shannon said. “And why airports are so dangerous.”

The video also shows several people trying to subdue the man and stop the fight.

At the end of the video, another man confronts the Spirit Airlines agent for “fighting a woman,” with the two standing chest to chest with their hands behind their backs.

You can watch the video here (Warning: The video contains language that some may find offensive. The following program contains scenes that may offend your moral sense.):

Shannon said he’s seen a wide range of discussion of the comments since posting the video.

“What happens if the woman strikes first, triggering verbal abuse and assault?” said Shannon. “And what happens if the man freaks out? What do you do? I would just encourage everyone to really have an honest conversation about this video. And asking themselves what they would do and what they should do.”

Spirit Airlines and DFW Airport told WFAA in a statement Friday morning that they were aware of the altercation between the agent and the passenger. They added that “the seller at DFW has suspended the agent.”

“Spirit Airlines does not tolerate violence of any kind and we are working with local law enforcement to investigate this matter,” the statement continued.

The WFAA has contacted law enforcement to see if the woman will also be charged in the incident.