In a way, every season The voice is the same, right? Early on – and it never fails – we You end up picking one or more favorites, only for them to be cut at the end of the live playoffs (if not sooner). But I really don’t think that’s going to happen with the four-chair rotation that particularly dazzled Blake Shelton, Gwen Stefani, John Legend and Camila Cabello on Monday’s episode. The artist in question – the last one discussed below – is blessed with a voice that just won’t quit – perhaps because it’s so huge it never does to have break up. Were you just as impressed? Read on and we’ll cover not just her performance, but all of the night’s blind auditions, then you can hit the comments with your critiques.

Andrew Igbokidi (Team Camila), “when the party is over” — Grade: A | The coaches might as well have given this first-generation American (of Nigerian descent) a quick pass to the season 22 finale. The budding heartthrob’s Billie Eilish cover, as emotional as it was gorgeous, earned him four chair turns and — to my ears, at least — frontrunner status.

Cara Brindisi (Team Gwen), “All Too Good” — Grade: A | This big-hearted music therapist took the stage with a perfectly radio-ready voice that’s as warm as a jar of honey left in the sun. About the only thought I could see – well, Listen – The fact that the audience has heard many singers like them speaks against them. Kind of surprised that only Blake and Gwen turned to look at her.

Valarie Harding (Team Legend), “Give him something to feel” – Grade: B | Damned! This 41-year-old mother of four was able to stretch notes as if they were the rope in a tug of war. And as John and Gwen noted, she often snapped vocally when we might have expected her to snap. But is she the best in her field? open. 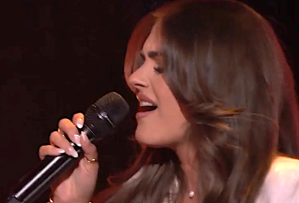 Julia Aslani (Team Gwen), “Let’s Stay Together” — Grade: C | Although the rider stumbled a little out of the gate, she recovered well enough to show us that she has a lovely, light voice and an appealingly easy-going singing style. There was just nothing in the voice or presence of the one-chair turn that could make you say “wow.” Well, maybe her mane (the shampoo ad was amazing).

The Dryes (Team Blake), “Islands in the Storm” – Grade: C- | Married for 10 years, this cute couple looked like they were having a great time. Unfortunately, Katelyn is a much stronger singer than husband Derek, and the karaoke quality of her performance didn’t bode well for her longevity in the competition.

Ava Lynn Thuresson (Team Camila), “…Baby One More Time” – Grade: C | This young high school grad, who cut music out of her life after the death of her cousin who taught her to play guitar, served up a rocking reinterpretation of Britney’s hit. But that inventiveness was more impressive than her voice, which too often yellowed.

Madison Hughes (Team Blake), “Knockin’ on Heaven’s Door” — Grade: B- | As a 25-year-old videographer, Madison may have the most unique voice of the season. It’s like what you might get if Jewel’s voice had a cowboy junkies baby. I do worry though: “Different” doesn’t always get very far The voicemakes it?

Sasha Hurtado (Team Camila), “River” — Grade: C+ | First, I was all in Bishop Briggs’ performance in this two-chair session. Sasha had some nuances in her performance that lifted her far above Ava’s, shall we say. But then somehow her inexperience showed and things got a little out of hand. (Maybe Sasha bit off more than she could chew with her song choices?)

Morgan Taylor (Team Legend), “Because I Love You” – Grade: A+ | “Fear literally controls every aspect of my life,” this 20-year-old told us before blowing up the studio roof. But it sure is [bleep] not shown holding the microphone. Absolutely deadbeat, the four-chair curve delivered a performance that grew bigger every time you thought it might be impossible. breathtaking.

Were you as excited about Andrew as the coaches were? Who else did you notice? Vote in the poll below, then click the comments.

A year later, residents say conditions at The Standard at Austin apartment complex have improved