Playing in the middle might work for the first tribal or two, but as survivor‘s Sami Layadi revealed on Wednesday that biting you will eventually come back if you don’t choose a side.

After the legendary Last Gulp immunity challenge made three players (Karla, Owen and Cody) immune, Sami was one of only four players to be on the chopping block at this week’s tribal council. Despite his attempt to pit the tight-knit duo of Karla and Cassidy against each other (and burning a few bridges along the way), the rest of the tribe just couldn’t trust his flip-flop and unanimously chose to send him packing for the vote. (Read a full synopsis here.)

But who did he want to go with until the end of the game and what did he regret most in the game? Below, Layadi breaks everything up.

TVLINE | Why are you giving the exit interview today?
SAMI LAYADI | I forgot that humans have eyes and ears, to be honest man. I crossed and flipped and flopped and it caught up with me. I think there’s a point in this game where you have to say, ‘Okay, that’s what got me this far. I have to stay with these people now.” And you stay with the people you think you could beat. I wanted to snake my way to the end and it caught up with me! 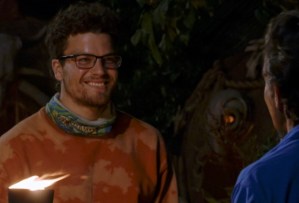 TVLINE | You played in the middle for a long time. Is there anyone you wouldn’t have voted out or turned your back on?
I didn’t want to turn my back on Owen, Gabler and foolishly I didn’t want to turn my back on Cody. There was a point in time when I didn’t want that [vote out] Cass or Karla [either], but they were just such good players. You were such a good thinker. The difference with Cody, Gabler and Owen… as for Cody, I thought he was “living” and just being out there having fun. And Gabler and Owen, I felt like if I got to the end of this game with them, I was in the game with them from the start so I can say and articulate what they did in this game compared to what what i did because i was there . I saw it. As for the others, Cass, Karla and Jesse, I didn’t know and I wouldn’t have a chance if I made it to the end with them.

TVLINE | Had you passed that vote, do you think you could have repaired your gaming relationship with Karla?
I didn’t want to choose Karla again. After that vote, she gave me so much hope and was one of the few people – you see it in the episode – who said to me, “I don’t want to cut ties with you.” No one else has spoken to me like that after I used his name had written down. For her to do that, our relationship was really strong at that point. It would have been interesting to see. I would have had a really hard time putting her name back down after that point, but I would also have had a hard time beating her at the end of that game. Hard to say man. I probably would have tried to get to the end of the game with Gabler and Owen, but you never know.

TVLINE | Both you and Jesse have talked about turning Karla and Cassidy against each other. Did you feel that getting Cass out at this stage wasn’t plausible?
I did. I’ve been talking to Gabler and Cody all day and they’re like, ‘Listen, man, if anything goes wrong, we’ll let you know.’ I was like, ‘What? why would you tell me that Just tell me it’ll be alright!” Then at Tribal I tried to talk to them and they didn’t look at me or do anything, so I owe them credit for playing Shot in the Dark.

It was just unfortunate with Cass. We had formed a pretty strong bond where at one point we were discussing, “Maybe we can take Karla down sometime,” and I sort of ruined it. I roasted it. I remember all day long when Noelle was voted out, Cass tried to say to me, ‘Listen, Sami. Don’t do that yet. Wait for it,” and I wasn’t listening. I built so many strong relationships in this game and eventually I stopped paying attention to every single relationship. That was my biggest mistake in this game I think.

TVLINE | You have to participate in this classic survivor immunity challenge. How did it feel to be in the water and under that trellis?
I don’t know if I would say I participated! You’ve been out there a long time, dude! Even Jesse, who was third, I think, fought against that tide. For someone who has at least touched the grates, I really haven’t been around that long. But listen, Owen is a crackpot because he said, ‘I’d love to take on that challenge. I can’t wait to take on this challenge.” I freaked out when I saw that this was the challenge we were doing. I thought, “Is this legal? Are there any Fijian laws I can pull out of my back pocket that can save me from having to compete on this?” This challenge is freaking freaking bro! Salt in my nose, eyes, throat… and I was only in it for 30 minutes, let alone three hours. Come on!

TVLINE | Three out of seven people were immune, that was crazy! Would you have stood a better chance if only one player was safe?
I think so. There were a lot of rumors about who should be the priority takedown at this point. I was at the bottom. You don’t get that guy down there at seven, you start your shots at seven. If Cody, Owen, or Karla hadn’t been safe that day, there might have been talk of taking down some of those big threats that are still in this game. But eventually it fell on me, and I don’t blame it on the fact that three people were safe; I blame it on the fact that I totally blew up my own game and that’s on me. But it was definitely unprecedented. I loved Owen and Karla. They were such warriors during this challenge. They punished that thing! I couldn’t be mad at him. listen man survivoris a crazy game at its core. Some things go your way, some things don’t.

TVLINE | Were you hoping that announcing you use your shot in the dark would have put people off writing your name?
I was. I felt like all the voices were against me. I wouldn’t say it was a bluff when I said it, but it was like, “Hey, listen. I’ll do it. If you do what you said, you don’t need me to do that.” When I said that and told Karla it was unfortunate, I thought, “Well, that’s it total Event.” Even after Jeff read Not Safe…if you’re playing this game, you gotta have hope, man. A little bit of hope. Well, I still had that little, little, little Glimmer of hope that it would be Sami, Sami, Cass, Cass, Cass. Then when all was me. I said, “Shucks, man. This is the end of the road.”

TVLINE | Looking back, is there anything you would have liked to have done differently?
I think people are stupid when they say they have no regrets. I should have cultivated my relationship with Gabler more. I should have kept Owen more informed. Obviously I should have identified Jesse as a threat. One of my biggest regrets is not being faithful to Karla when she was faithful to me and trusted me. The same goes for Cassidy. We developed a good relationship out there and I kind of burned her without paying too much attention to her.

For future players, don’t burn relationships in this game. Do not do that. Don’t count anyone out because it may come back for you at the end of the day. You always have to be aware that people are important. Even if it’s a group of eight, nine, smaller groups. Everyone’s opinion counts. Everyone’s voice counts. I can learn that for the future.