SystemRescue 9.06 may only be a point release, but it has some good stuff, including the newly released Xfce, MemTest86+ version 6, and a new USB key writing tool.

We looked at SystemRescue 9 when it came out almost a year ago. While version 9.06 isn’t a very different version number, it does have some significant changes that deserve a fresh look.

One of the important changes is functional. As the name suggests, SystemRescue was created for a specific purpose: troubleshooting faulty computers. For many years, one of the most handy tools for this has been MemTest86+, which has long been included in the boot menu of many Linux distributions. The catch is that until recently, MemTest86+ only worked on BIOS-based PCs.

The new version of SystemRescue includes Memtest86+ version 6, which was released back in October. This is the first non-beta release in nine years, and has an important new feature: v6 supports UEFI. This means it will work on newer, UEFI-only hardware like Intel-based Apple Macs.

This is important because the best way to use MemTest86+ is to boot it on bare metal: firstly, because you can test machines that may not be able to due to faulty RAM, a modern multi-gigabyte operating system to load; and second, because MemTest86+ can test more memory of the machine by booting. The program itself is tiny and only requires 141 kB on the hard disk. If your computer has 8GB of memory, booting straight into MemTest86+ means you can test all but about 0.00002 percent of it. 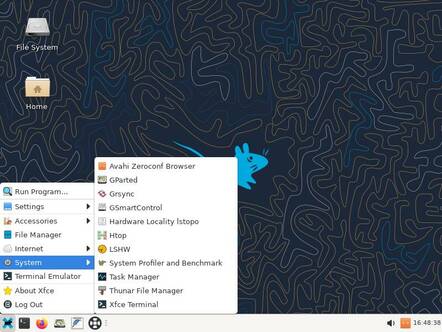 More useful on more devices than ever before, SystemRescue 9.06 also includes the shiny new version of Xfce

Another new feature is mostly cosmetic but still good to have: It’s the first new distribution version Registration number FOSS Desk has seen that it contains the final version of Xfce 4.18, which we mentioned would be out soon earlier this month. Now it’s here, and SystemRescue includes it. It picked up the new version so quickly that it’s based on Arch Linux, which is often one of the first distros to get new versions of things – observant readers will have noticed that the screenshot in our IceWM 3.0 coverage uses Arch Linux. Until SystemRescue 6 in 2019, SystemRescue used Gentoo.

The relevance of it being included in SystemRescue is that you don’t need to install anything at all if you want to take a look at the new version of Xfce. SystemRescue was designed to be used as a live environment and it’s only a 748MB download.

Another nice feature is something outside of the distribution itself. It’s the new SystemRescue USBWriter application. This is a small tool to write the ISO image to a USB stick distributed as an AppImage to make it run on any distribution. It is only 6MB compared to the popular Balena Etcher app which is 91MB. Text-based and menu-driven, the SystemRescue USB burner is a lot less daunting than running the dd command and possibly accidentally overwriting your hard drive. ®

In case you’re wondering, MemTest86+ is not the same as MemTest86, which is PassMark’s proprietary freeware. ®

Argentina vs. France is the most-watched World Cup final in US history

Paramount+ under fire after subscribers can’t stream the Grammys