Once the first of Tales of the Walking Dead was told on Sunday’s Evie/Joe, a single question arose: Has the premiere of the anthology series — the third installment in the AMC drama, which wraps up its 11th season this fall — made you eager to return for a second story… and a third…? Before you reply in the comments section, let’s go through the storyline that created a tag team of Terry Crews and Olivia Munn, shall we? 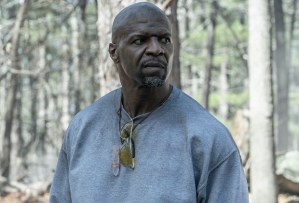 As the episode began, we met Joe (Crews), a lovable survivor doing well in his bunker a year after the world ended. That is, he was until his beloved Doberman was killed by strays. Suddenly lonely, Joe decided to hop on his souped-up motorcycle and go on a road trip, hoping to meet another doomsday prepper he had flirtatiously corresponded with online before the apocalypse.

Long before Joe could reach his destination, he fell victim to booby traps set by Evie (Munn), a hippie dude who was out to leave his own tracks to see if there was still a chance she and her estranged husband Steven would make it . Since Joe’s bike was equipped with a kill switch, Evie was forced to involuntarily make him her chauffeur, handcuffs and all.

As you might expect, Joe’s initial animosity towards Evie lessened over time. Yes, she teased him to death. But she was also sorry when she interfered in his business by reading his journal against his will, and was kind enough to throw a blanket over him while they slept in the woods. Eventually, after battling a group of strays together, they became less of enemies than friends. (He even let her drive for a change!)

During a pit stop, Joe invited Evie to search his journal for clues to the exact whereabouts of his mystery wife’s home. As Evie’s husband was said to be hiding nearby, she knew the area. Unfortunately, when she got a “By George, I’ve got it!” At that moment, Joe left the bike unattended just long enough for it to be stolen by a man who left a lamb in its place.

Angered, Joe lashed out at Evie, going so far as to declare himself Team Steve. In return, she called Joe all the way out. “You were so busy surviving the end of the world,” she yelled, “your never started!”

After harsh words, Joe said goodbye to Evie and finally made his way to his mystery wife’s house. “The apocalypse did you good,” he said as he came face to face with Sandra. However, it hadn’t worked wonders for her sanity. Before you could say, “Oh, s—t,” she had baked it on a pot brownie, made up her face like Baby Jane Hudson, and, knowing he was trying to steal her bunker, started threatening him with a butcher knife .

After Evie got the closure she needed from Steven – she didn’t find it but a painting suggesting he hadn’t hated her after all – she and the lamb went to see Sandra. Again the madwoman served up a spiked brownie, but Evie was a connoisseur and didn’t get involved. As Sandra ran around with a knife, Evie was able to fight back and free a tied up Joe just in time to hurl a gun into his would-be girlfriend’s chest.

The morning after, Joe Evie expressed his thanks for coming back for him – and his regrets. She had been right. He had wasted his life. “So start now,” she challenged. “You have a person standing right in front of you.” And there were more out there. And if that wasn’t a happy ending Skipper didn’t go the way of Tabitha the Goat the Walking Dead.

So what are your thoughts on the Tales premiere? Rate it in the poll below, then click on the comments with your ratings.