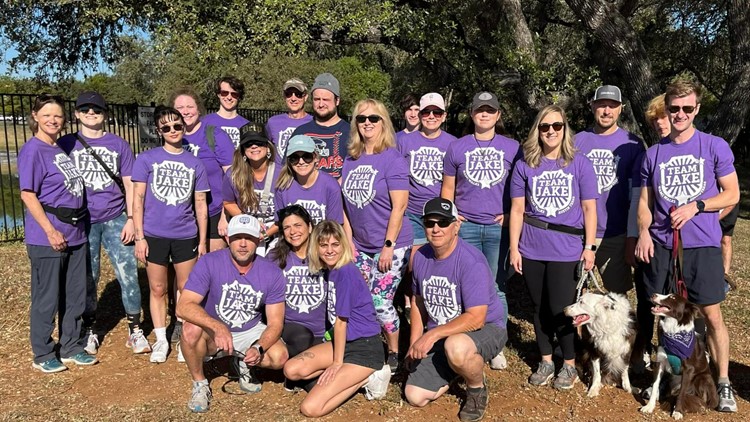 After his loss, the Oakes family formed Team Jake to help other families gain support in their fight against mental illness.

AUSTIN, Texas – A local group walked Saturday to raise money for the National Alliance on Mental Illness (NAMI) as they remember a loved one they have lost.

On October 1st, a local group called “Team Jake” ran as part of the regional “NAMI goes your way“Central Texas Campaign. The annual campaign, which takes place in September, raises money through various local groups and culminates with a walking tour of downtown Austin and Long Center.

Although the walk together was on September 24th, Team Jake’s walk on the Arbor Trails in South Austin took place on October 1st due to some team members being out of town the previous weekend. Team Jake Captain Marcia Oakes explained that the walk is not only intended to support those living with mental illness, but also to commemorate her son.

“[Jake] is such a fun and quirky kid, just so cute and introverted in larger groups,” explained Oakes. “But you know, when he was with his best friends and family, [he was] the life of the party.”

Jake Oakes, the son of Marcia Oakes, suffered from mental illness for years and lost his fight in 2016. After his loss, the Oakes family formed Team Jake to help other families gain support in their fight against mental illness and to advance the research that goes into it.

“This team began by actively honoring Jake and recognizing how bravely he fought his depression. But we also want to help more families like ours and we need your help to do that. What NAMI Central Texas can offer to this community is transforming lives and SAVING lives,” says Oakes’ donations page.

Over the past six years, Team Jake has raised $43,828 for NAMI Central Texas. This year, all teams associated with NAMIWalks Your Way Central Texas raised a grand total of $275,165.00.

Gary Oakes, Jake’s father, explained that it is the reason the team keeps going each year and raises money to ensure no other family experiences what his son is struggling with.

“That’s why we’re doing it, as you know, to keep his memory alive … and we’re still trying to raise money and raise awareness so we can make sure this doesn’t happen to other families because it’s devastating,” he said Gary Oakes.

https://www.kvue.com/article/news/health/team-jake-walks-to-raise-money-for-mental-health/269-42f788b0-31d6-4aa1-906c-afae0315e6dc Team Jake goes to raise money for mental health after a loved one has been lost