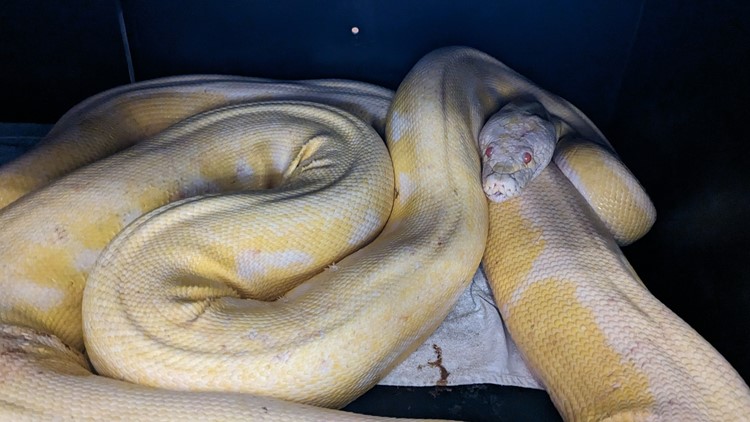 The snake’s owner was visiting Austin of the Dallas area when his car was broken into and a tote bag containing Snow was stolen.

AUSTIN, Texas – The Austin Animal Center said Monday his employees were helping to recover a 16-foot albino reticulated python that had been wandering in the Coronado Hills neighborhood of northeast Austin since July.

AAC said the snake, named Snow, was lethargic due to the cooler temperatures and a few residents were able to catch it and keep it in their garage.

Local residents told AAC they had sighted the python in the neighborhood since July.

Snow was temporarily housed before being admitted to the Austin Zoo.

“We called him and he was able to identify a unique feature of the python,” AAC said a Facebook post. “He drove down the next day to pick her up.”


The snake’s owner was visiting Austin of the Dallas area when his car was broken into and a tote bag containing Snow was stolen.

“Oh to see the look on the thief’s face as they opened it up,” AAC wrote.

Snow is now reunited with her owner and Coronado Hills no longer has to look out for a giant python.

https://www.kvue.com/article/news/local/austin-animal-center-python-snow/269-0a136de3-246f-4872-a6ab-1b980a8e715c The Austin Animal Center has recovered a 16-foot python through the Coronado Hills since July