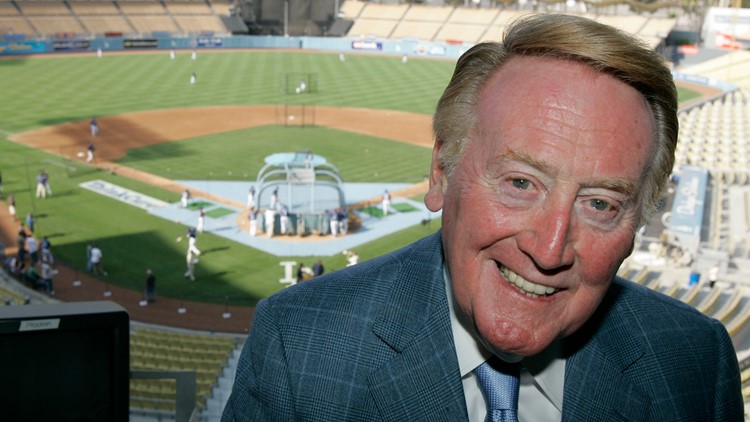 The Dodgers will wear a black patch with a mic and the name “VIN” on their jerseys for the remainder of the season.

LOS ANGELES — The Los Angeles Dodgers will honor Vin Scully in a ceremony ahead of Friday night’s game against the San Diego Padres.

The Hall of Fame broadcaster died Tuesday at the age of 94. He named games in Brooklyn and Los Angeles the longest-serving broadcaster in a professional sport for 67 years.

Scully is also commemorated at various locations around Dodger Stadium.

Behind the press box named after him will be the “I’ll Miss You” banner from his last stadium game in 2016. Some of his World Series rings will be on display beginning August 19.

A tribute to Scully is added to the display case in the lobby.

The Dodgers will wear a black patch with a mic and the name “VIN” on their jerseys for the remainder of the season.

The Dodgers tweeted a statement Tuesday regarding Scully’s death, calling it the “heartbeat of the Dodgers — and in many ways, the heartbeat of all of Los Angeles.”

“We’ve lost an icon,” Dodger President and CEO Stan Kasten said in the Twitter statement. “His voice will always be heard and forever engraved in all of our minds. I know he was looking forward to joining the love of his life, Sandi. Our thoughts and prayers go out to his family at this very difficult time. Vin will really be missed.”

ABC7 Chicago meteorologist Greg Dutra discovers his TV is a touchscreen: "I didn't know he could do that!"