The Beginner: Federal Agencies officially reported for duty — or whatever FBI agents do — this Tuesday night on ABC. Will you continue to watch the offshoot of The beginner?

The Beginner: Federal Agencies Stars claws‘ Niecy Nash-Betts as the charmingly(?) wayward Simone Clark, who was introduced in a springtime two-piece The beginner. In this backdoor pilot, Officer John Nolan (played by Nathan Fillion) and the LA Branch of the FBI enlist the help of the careers counselor-turned-oldest FBI trainee ever when one of her former students is suspected of a terrorist attack. 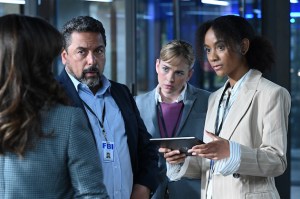 in the The Beginner: Federal Agencies‘ Series Premiere, Simone and Other Quantico Alumni/Alumni vampire cop Stern Brendon Acres (rebel‘s Kevin Zegers) arrive from the Academy in Los Angeles. Simone naturally aims to join the newly formed Rapid Response unit that Matthew Garza (Felix Solis) is in charge of after cashing in some of his chips after the deployed pilot’s saving events. Instead, she is sent straight to the background check department, aka a very drab desk job. (Thankful roll alert for Steven Culp!)

Being Simone, Simone crashes a high-level briefing to get Garza to correct this perceived mistake. He explains that while Clark’s role in thwarting this terrorist attack was appreciated, she “is a torpedo looking for a target” and he can’t risk it becoming his new scrutinized unit.

Guess what? After Simone once again uses her insane counseling skills (even noticing a POI in the background while FaceTiming with Brendon!), Simone helps Garza’s team solve a big case and is allowed to join his team.

On the home front, however banshee‘s Frankie R. Faison is back as Simone’s father, Christopher “Cutty” Clark, who she will be living with (at least in the meantime).

Not Kat Foster returns from the Backdoor pilot as Agent Fox.

Now that you’ve seen it The Beginner: Federal Agencies in action, did the note make it? And will you be back for episode 2?