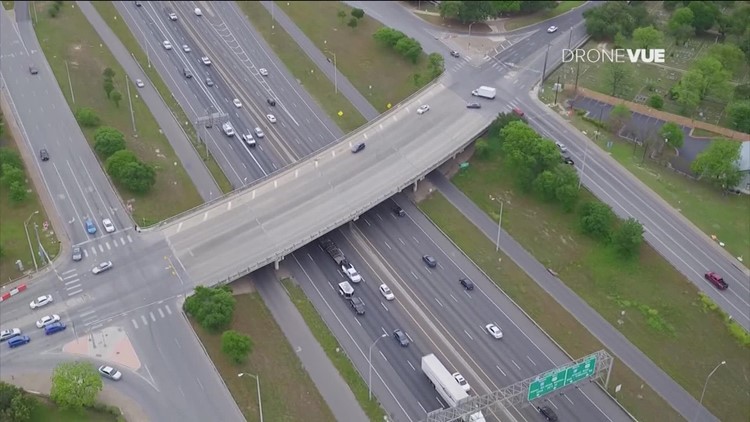 The project draft stipulates that 107 companies, apartments and properties will be marked for possible displacement.

The draft gives Central Texans a first look at how many homes and businesses could be affected by the expansion, putting them at risk of eviction.

Rodney Falkquay, owner of BL hair salon, has been in business at Cameron Road off I-35 for almost two years. He found out about the project today and confirmed to KVUE that he hadn’t heard from TxDOT.

“This area here is a high traffic area and you know people are passing in and out of the city,” Falkquay said. “So it’s a great opportunity for business.”

The eight-mile project runs along I-35 from US 290 East to State Highway 71 and Ben White Boulevard.

Modified-Build Alternative 3 proposes adding two high-occupancy non-toll lanes in each direction along I-35 from US 290 East to SH 71/Ben White Boulevard. The project would also lower the main lanes of I-35 between Airport Boulevard and Lady Bird Lake and Riverside Drive and Oltorf Street, remove upper decks, widen east-west crossing bridges, add boulevard-like segments through downtown, and improve pedestrian precincts and bike lanes.

The selected proposal would cost approximately $4.5 billion to build. This is slightly more expensive than Build Alternative 2’s $4.45 billion.

Under Modified-Build Alternative 3, the draft calls for 107 businesses, homes and land to be marked for potential displacement. This includes the loss of 625 jobs.

“People really need their jobs; They really need things in that area,” Falkquay said. “I understand that 35 needs to be expanded, but if it’s affecting the community that much then I think they should reconsider some of their plans. ”

Reconsider 35, an advocacy group against interstate expansion, said there are ways to upgrade I-35 without growing it. Adam Greenfield, executive director of Rethink 35, said the impact of this project will be “profound.”

“The Texas Department of Transportation claims that widening I-35 will help with traffic congestion,” Greenfield said. “We know from 100 years of experience that highway widening makes traffic worse because more people are driving.”

TxDOT officials said department members are working to contact companies at risk of displacement to assist in the acquisition process. Falkquay said he hadn’t heard anything.

In a statement to KVUE, TxDOT said:

“TxDOT proposes to provide relocation assistance for the eviction of community facilities that serve low-income populations, minorities, or otherwise underserved communities in excess of what is required by law. These include small businesses, health care facilities, and day care centers that serve these populations.

According to the draft, most project shifts will be concentrated in the Upper Boggy Creek, North Loop, Windsor Park and Hancock neighborhoods. Other affected regions include the loss of some downtown businesses, the displacement of some auto dealerships and gas stations near East Cesar Chavez, and the loss of Jimmy’s Barbershop in South River City.

Compared to the “Build-Alternative 2” proposal, the “Modified-Build Alternative 3” proposal includes fewer properties at risk of displacement.

TxDOT hosts a in-person and virtual public hearing on the draft proposal on February 9th. Residents have until March 7th to provide feedback on the project.