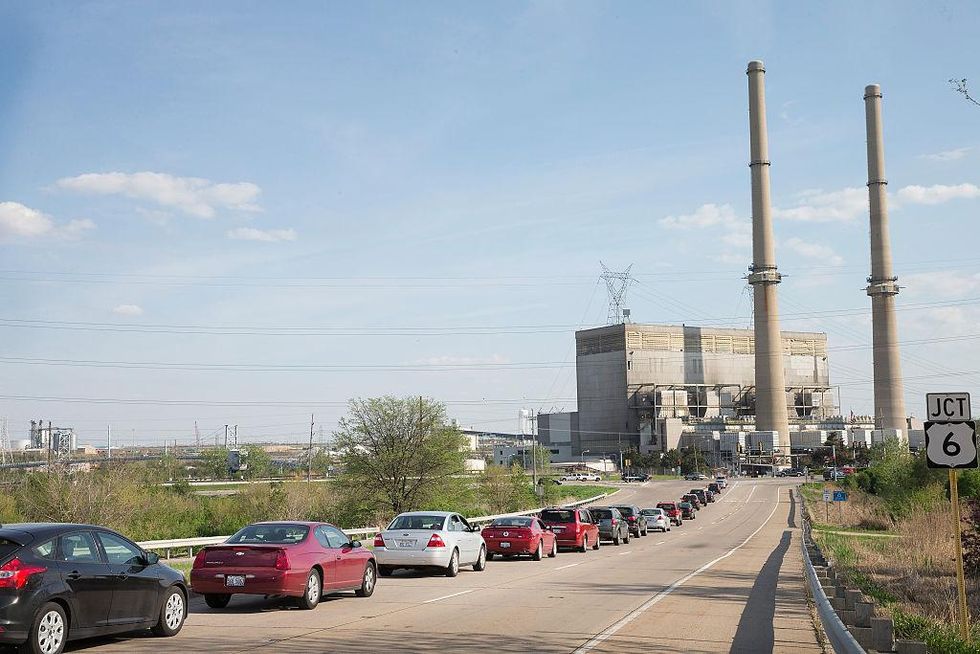 The US federal government will spend $3.5 billion on a carbon capture project to try to minimize the damage from climate change. In a statement released Thursday, the US Department of Energy announced a massive financial investment in a “program to capture and store carbon dioxide (CO2) pollution directly from the air.”

The Department of Energy pledged that the $3.5 million climate change project would help “priority community engagement and environmental justice.”

“The Regional Direct Air Capture Hubs program will support four major, regional Direct Air Capture Hubs, each comprising a network of carbon removal (CDR) projects to address the impacts of climate change, create high-paying jobs and improve the community prioritize engagement and environmental justice,” read the Department of Energy statement. “In addition to efforts to deeply decarbonize the economy through methods such as clean power, efficiency and industrial innovation, the widespread use of direct air capture technologies Transportation and storage infrastructure has a key role to play in achieving President Biden’s goal of an equitable transition to a net-zero economy by 2050.”

“Each of the projects selected for the Regional Direct Air Capture Hubs program will demonstrate the delivery and storage or end-use of removed atmospheric carbon,” the DOE statement said. “The hubs will have the capacity to capture at least one million tonnes of CO2 from the atmosphere annually and then store it permanently, either from a single unit or from multiple interconnected units.”

Last December, President Joe Biden signed one supreme command to ensure that the US government will have net-zero emissions by 2050 at the latest. The guard reported last year: “The government will cut its emissions by 65% ​​by the end of this decade before achieving carbon neutrality by 2050.”

The locations of the hubs have not yet been announced.

An approach to carbon removal in which mechanical systems capture and compress carbon dioxide (CO2) directly from the atmosphere for injection into geological storage or for use in the manufacture of durable products such as cement. There are various technologies for this. Some use chemicals that combine with CO2 in the air and release the CO2 when heated. Others use changes in temperature, humidity, or electrical charge to capture and release CO2. Other applications of direct air capture technology, such as using captured CO2 in greenhouses or to make synthetic fuels, are a form of carbon capture and use, or “carbon recycling” because the CO2 is quickly released into the environment after the products are consumed atmosphere returns. Synthetic fuels produced with direct air capture (“air-to-fuels”) could still contribute to climate protection by replacing fossil fuels.

US Secretary of Energy Jennifer M. Granholm quoted a recent report from the Intergovernmental Panel on Climate Change (IPCC) of the United Nations: “The latest UN climate report has made it clear that the removal of contaminated CO2 from the air through direct air capture and safe storage is an essential weapon in our fight against the climate crisis. “

The IPCC report states: “Carbon dioxide removal (CDR) is necessary to achieve net-zero CO2 and GHG emissions both globally and nationally and to offset ‘hard-to-reduce’ residual emissions. CDR is also an essential element of scenarios that limit warming to 1.5°C or likely below 2°C by 2100, regardless of whether global emissions reach near-zero, net-zero, or net-negative levels.”

However, some critics of direct CO2 removal (CDR) and direct air capture claim that the processes allow fossil fuel producers to stay off the hook and allow energy companies to continue using oil, natural gas and coal.

There is also a cost consideration. A 2018 report found that it would cost $94 to $232 to remove one ton of CO2 from the atmosphere.

Business Insider reported last year that at a cost of $100 per tonne of CO2, it would cost $5 trillion per year to eliminate all of humanity’s carbon emissions. It would also take an estimated 50,000 carbon removal plants to capture all of our carbon emissions.

https://www.theblaze.com/news/carbon-capture-costs-government-billions The US government is providing $3.5 billion for the carbon capture program