As The voice‘s Blind Auditions drew to a close Tuesday night as season 22 began getting in shape, with each of the coaching teams having at least one standout on their list. (Think of Team John Legend’s Morgan Taylor, Team Gwen Stefani’s Daysia, Team Camila Cabello’s Andrew Igbokidi, and Team Blake Shelton’s body). Were any new frontrunners added to the pack in Night 6? Read on and we will discuss. 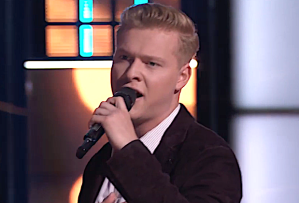 Austin Montgomery (Team Blake), “I can’t help it (if I’m still in love with you)” – Grade: B | This baby-faced old soul may have, as he put it, “done nothing” musically before. The voice, but that didn’t stop him from creating such strong Elvis Presley vibes with his baritone that he earned a three-chair turn. Possibly the easiest manager pick of the season.

Dia Malai (Team Legend), “True Love” – ​​Grade: C | Man, I wish this 26-year-old from Queens sounded as cool as she looked. She certainly had some strong moments during her performance where you said, “Yes, she has it.” But then the one-chair turn sounded uncertain so many times that you also said, “Hmm, she knows what to do.” is do in order to?”

Benny Weag (Team Blake), “Shivers” – Grade: C | Maybe Benny deserved more than a C — his trainer liked his tone and his bag — but we literally heard about 10 seconds of his audition. (Yes, I went back and timed it.) So who can say for sure?

Jillian Jordyn (Team Gwen), “Issues” – Grade: C | I have to remember that Gwen will regret her early chair change for this 17 year old. (Or throw them overboard in the battles.) Of course, it’s understandable that Jillian would get nervous when she sees Gwen’s and John’s faces turn. But it’s worrying that her performance ultimately felt like she was forcing it on us rather than giving it to us.

Grace Bello (Team Camila), “Ghost” – Grade: A | “Haunting” is probably the best word to describe the 21-year-old’s Justin Bieber cover; it’s just punny too. As John noted, the four-chair spin was subtle and nuanced rather than big and bombastic, allowing us to hear how good it was rather than just how loud it could be.

So which candidate got your ears perked up? Choose your favorite in the poll below, then click on the comments with your ratings.