As The voiceSeason 22’s blind auditions resumed Monday night, recruiting Camila Cabello, Blake Shelton, Gwen Stefani and John Legend a couple of beauty queens who definitely topped the talent share This competition, a Cuban-American Nick Nelson whose vocals were a real, um, heart-stopper, and a fashionista who made some dramatic changes to Mandy Moore’s 1999 pop hit. And if you read on… Oh, I see you’ve already jumped down. As you were then. Let’s recap. 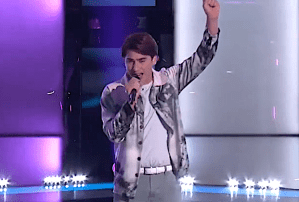 Kique (Team Gwen), “Pretty Girls” — Grade: B | This young reptile lover, who fought as a bi-guy in an all-boys Catholic high school, has a beautiful, soulful voice, a particularly memorable lower register, and a face fit for the cover Seventeen. But for most of his performance, he looked scared to death. Where was the playful personality he revealed? after he sang if did he sing?

Hillary Torchiana (Team Blake), “Easy on Me” – Grade: B- | Rising from the ashes of a house fire that claimed the lives of her beloved cat and dog, this soon-to-be-married 34-year-old earned a single chair spin with an Adele cover who was likely tech-savvy — even inventive, at times. There was just something vinous about her tone that made her seem like a likely victim of the battles.

The Marilynds (Team Legend), “What If I Never Get Over You” – Grade: B+ | These sisters, besties, and one-time Miss Marylands—with a duo name we all know knows I’m destined to misspell 100 times – delivered an absolutely gorgeous lady-a-cover. Sweet if not quite girl named tom caliber, harmonies and really distinctive individual voices. The only thing that worked against the siblings was the somewhat insincere vibe that’s often associated with beauty queens.

Kara McKee (Team Legend), “Woodstock” – Grade: C | I’m sorry to give Kara a C when we were only offered the tiniest snippets of her tryout (especially after raving about SOLsong, whose name is autocorrected love). She just seemed…shaky. Maybe it was brilliant and it was just vibrato that I heard. However, she didn’t convince me.

Zach Newbould (Team Camila), “Use Somebody” – Grade: A- | This 19-year-old, whose father was keen to audition so he could have a beer with Blake, would have gotten a chair from me after his first grades; they sounded like they had already been mixed for the radio, they were spot on. As the two-chair spin continued, he demonstrated a solid rock voice. In the longer term, however, I hope he gets steered more into the emotional ballad track, which sounds like this could be his sweet spot.

Lana Love (Team Legend), “Candy” – Grade: A | Holy crap! How could this 30-year-old just do a chair twist with her sedation? Serious breathtaking – and creative reinvention of Mandy Moore’s pathThis is us blow. Her voice was flawless and powerful, she looked right at home on stage, and in general was that high note she hit towards the end? Insanely good.

Daysia (Team Gwen), “Crazy” — Grade: A- | The lighting director could have taken a coffee break when this 17 year old was on; she was the beaming even though she had only lost her mother five years earlier. Your performance may have been a little uncertain – maybe nervous? – but it didn’t detract from the fact that the two-chair turn’s voice was absolutely lovely and polished to the last detail.

Ansley Burns (Team Blake), “Unchained Melody” – Grade: C | This 15-year-old, whose little brother can pass the driver’s test, which she can’t (damn it!), clearly has talent, an impressive range and some oomph in her vocals. But she’s like a stew that might have to cook on the stove for a while; It’s not quite ready to be served. Kind of a waste that Blake used his block against his wife to make sure he could recruit Ansley.

bodie (Team Blake), “You found me” – Grade: B+ | This tattooed 29-year-old father of three, who used music to cope with his alopecia, managed to keep his Fray cover going even as Blake yelled at John. (C’mon, boys!) And for Bodie’s efforts, he’s earned a four-chair turn. Solid voice – and I love that he might bring some alt-rock to the show – but kind of monotonous. Nonetheless, Blake said to him – and I think he’s probably right – “You’ve got what it takes to make the finals of The voice.”

Who made you turn up the volume on Monday to listen a little closer? Vote in the poll below, then click the comments with your ratings.