Chairs spun like hips making the turn during Tuesday night’s episode of The voice as wealong with Blake Shelton, Gwen Stefani, John Legend and Camila Cabello, were introduced to an affable wannabe Shawn Mendes, a country boy with the most winning smile on the site yellowstone‘s Kayce and a contestant who made history for the show. As? Read on and we’ll not only be talking about them, but all of the upcoming artists featured in Night 4 of the Blinds. 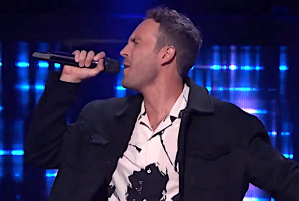 Tanner Howe (Team Gwen), “Mercy” – Grade: C | This 29-year-old took the stage knowing he was about to perform a Shawn Mendes song in front of the pop star’s ex, Camila. But even though she didn’t turn her chair, she was impressed by the supposed sound equality. “I thought that was Shawn,” she said. I’m not sure how Shawn would take that, mind you, considering Tanner was both “off” and “on” when he wasn’t actually singing in full voice.

Sydney Kronmiller (Team Camila), “Latch” — Grade: B+ | OK, so maybe Team Blake’s Madison Hughes Not have the most unique voice of season 22. Sydney likely stole that award with her laid-back performance, reminiscent of Tracy Chapman. It’s not Sydney only different, but with a voice that answers the question, “How deep can you go?” with “How deep do you want?” She also demonstrated a control over her whistles which boded well for her future.

Tanner Fussell (Team Blake), “Anymore” – Grade: B | This Nashville landscaper, blessed with a voice that can range from yodeling to snarling, only got a chair turn, but it was definitely the right one for him. He couldn’t have sounded quintessentially country if he’d performed in the back of a pickup truck with a chewing tobacco in his cheek. In fact, he might have would have chewing tobacco in his cheek; A few of those lyrics got awfully mumbled, didn’t they?

Eva Ulmman (Team Blake), “Lights On” — Grade: C+ | Of what little — and I do little in common — that we heard about the one-chair spin, she was fine, but just fine. Pleasant, slightly twangy and not immediately memorable. But really, we’ve heard so little of her performance that it should be given an “I” for incomplete.

Kayla Von Der Heide (Team Gwen), “Jealous Guy” – Grade: C | Ahead of her trial, the 30-year-old revealed she was often told her voice sounded like it came from another era. And sure, I could hear that; it also had a nice whiskey-soaked quality. Gwen likened it to a cross between Fiona Apple and Stevie Nicks. I would describe it more as a mixture of “pretty nice” and “almost good”. Good but not convincing.

Destiny Leigh (Team Gwen), “A Song for You” – Grade: B- | Another abbreviated blind. We were given such a tiny snippet of Destiny’s vocals that all I can say is that I wanted to hear more. If she’s a powerhouse like her coach said, at least let’s hear it the part, right?

Eric Who (Team Camila), “Villain” – Grade: C- | Another short-short. His coach loved his stage presence and tone. But from the little sample we got of him singing Billie Eilish, I feel like he must be leaning heavily on his personality.

Parijita Bastola (Team Legend), “Jealous” – Grade: A | The first ever Nepali-American candidate in the United States Voice, this 17-year-old spun all four coaching chairs with a near-perfect labrinth cover that had it all: passion, power, and runs so long and complicated they could have passed as mazes. (I kind of have a Jennifer Hudson vibe.) Parijita is definitely another one to check out.

So who caught your eye on Tuesday night? Vote in the poll below, then click the comments.