Cinematographer Claudio Miranda on finding a balance between weather, speed, military and a star who insisted on doing it for real.

Audiences cheered and stomped during a sold-out screening of Top Gun: Maverick at this year’s EnergaCamerimage, an annual festival in Poland dedicated to celebrating the art of cinema. After the screening, everyone at the festival wanted to know how cameraman Claudio Miranda, who was present, took the aerial photos. In an interview with IndieWire, the legendary cinematographer clarified: Nothing was easy shooting Top Gun: Maverick — not the fighter jets, the aircraft carriers, not even an opening sequence introducing the characters.

Although the dogfights were foreseen [Previsualisation], Miranda revealed that much of the Previs was discarded. “We spent a lot of money on it,” Miranda said, “but we mostly ended up with Tom in the end [Cruise] and the other pilots play with the control sticks. It was like they were kids again.”

The only way director Joe Kosinski Cruise has sold a Top Gun sequel, more than 30 years after the original, was by shooting in real jets. Miranda worked first with a Czech jet L 39, then with an older version of an F 18 fighter.

“It’s an older jet that didn’t have as much electronics,” Miranda explained. “Since my Navy techs had all seen the original ‘Top Gun,’ they got the idea to pull out a lot of gear. We ended up putting six cameras in the cockpit, including one about two and a half inches apart.”

Miranda still couldn’t get all the angles she wanted. The Navy did not allow cameras on the wings because they would degrade performance. “As a consolation prize, I got a back mount and the regular bomb mounts,” he added. “But you could only fly the plane on 3Gs with external mounts.”

The speed of the jets became a big factor. Jeffrey L. Kimball, the original Top Gun cinematographer, reminded him that a 10 pound camera feels like 70 pounds at 7Gs.

“I thought the original was anamorphic, but because of the size and weight of the camera, they shot spherical,” Miranda said. “Also, they shot 400ft rolls, which is about four minutes. We could be digitally smaller. We could shoot for half an hour with six cameras running. That was a big, big difference.”

Kimball also had advice on choosing lenses and working on an aircraft carrier. Prior to main production, Miranda and a skeleton crew joined the USS Abraham Lincoln on a training mission. There he was allowed to shoot takeoffs, landings, the flight deck and other details that would end up in the film.

“Kimball had issues where he couldn’t turn his carrier around,” Miranda said. “I found the right people to talk to and they just turned the boat around for me. It doesn’t cost her anything. To be perfectly clear, we were spinning around their missions – they weren’t launching jets for us. And I couldn’t aim at the sun. But we could shoot it either way to get our shots.

Production was heavily dependent on the weather. Miranda said the weather mostly cooperated, although it took him three days to capture the heroic shot of Cruise on a motorcycle hurtling down a runway as a jet takes off. “Too cloudy,” he said of the first attempts. “We’ve got one in the can, but we’ve decided to go back. It had to be at a certain time of day for the jet to cross directly through the sun.”

For the flight sequences, Miranda had to set the camera exposures before takeoff. “I had to guess what the weather was like 50 miles down the road,” he said. He constantly checked the weather reports. “I would look east where they were flying and see some clouds and maybe open a third one. Then wait, wait, they go away. Or are the jets flying 50 feet down a canyon? Then go with that exposure. I have to say I didn’t miss it.”

The cinematographer made it a point to introduce Paths of Hate, a 2010 animated short written and directed by Damian Nenow.

“We looked at aerial photography in movies, but it didn’t really fit what we were doing,” he said. “You know, for a racing movie, you can watch Grand Prix or something like that to see how they did it, which is what you want to emulate. We found this animation film and in the animation they can do anything they want. I showed it to Tom and Joe and said, ‘That would be pretty cool for the sequence that flies over water. Why don’t we do this differently? Why don’t we show things you can’t get anywhere else?’” 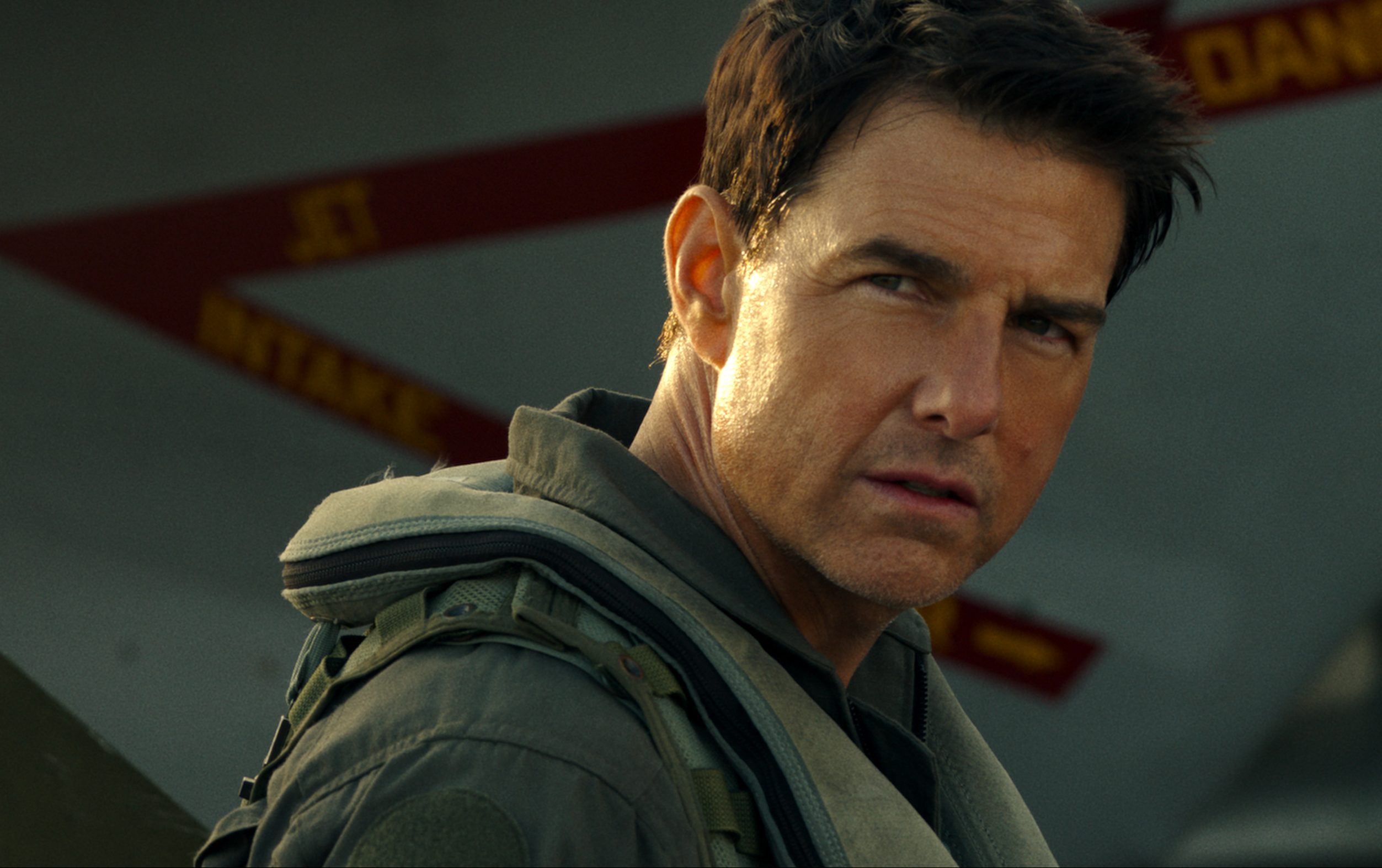 To capture the film’s monumental close-ups, the cinematographer examined how older Hollywood films portrayed power. “Stature, how to make people feel strong and powerful. We always set and moved the cameras in a specific way to make the close-ups feel strong. Interestingly, Joe and I usually tend to make lenses a bit wider. But Tony Scott [director of the original “Top Gun”] was always a bit longer, so we also preferred slightly longer lenses.”

Miranda also mentioned various tools at his disposal, such as depth of field or lens-to-actor distance, and how some actors look better on a 65mm lens than on a 75mm lens or vice versa. “But sometimes it’s just a moment where you and the actors are in a very small scene. Then it comes down to choosing the right equipment. Sometimes it feels better to be on a smaller device without all the other stuff. It can be liberating to have everything you could ever want. But it’s also about making smart decisions. It doesn’t always have to be a Technocrane.”

Miranda said that the material defines the visual style of his films. “My camera movements are rarely steadicam, rarely handheld. I use a lot of dolly and intentional framing positions, maybe because I got beat up by Fincher [Miranda shot Fincher’s “The Curious Case of Benjamin Button”] so much. Everything had to be accurate, “Split that cup right in half” or all hell would break loose. So I’m very used to this style. I understand like you cater to the actor and the dolly movement ends right on a line and you could deflate and inflate the movement.

Miranda used two cameras for a few moments. “I like two cameras,” he said. “Sometimes we had to do three cameras for an emotional scene or trying to enlighten someone. But I have a hard time really watching two cameras. The third is like, “I hope you get something good” because I’m watching the other two. I always have the feeling that the third party will throw their hands around.”

That still doesn’t explain the clarity of Miranda’s images, how quickly viewers can understand what’s essential in a frame. “We’re trying to make it as grounded as possible,” he replied. “We don’t want anything to feel synthetic. Even with regular appearances between actors, it can’t feel wrong.”

Both Kosinski and Miranda said the flight scenes weren’t the most difficult to shoot. They decided to reshoot that opening scene at Penny’s (Jennifer Connelly) bar to change the way viewers perceived her relationship with Maverick. Miranda took the opportunity to shed new light on the scene.

“Joe wanted a little more history between Penny and Maverick,” Miranda explained. “The first time I wasn’t happy with my lighting. Instead of a bar full of extras, we could take people for the second. This allowed me to use a little more lateral light and move it differently.”

A sequence in which Penny sails with Maverick proved even more difficult. You couldn’t find enough wind in San Diego or San Pedro.

“I was just sitting on the boat rocking with Tom,” laughed Miranda. “Third time in San Francisco was great. I had a camera on the side of the boat in front, I operated another camera on the boat next to it, and we also had a helicopter.”

The scene took some interesting turns.

“I had surgery and Joe was stuck in the seat. It’s been a pretty massive day. We blew a spinnaker. We flooded the Libra head. The camera department ran away in panic.”

Miranda is gearing up for his next project, a Formula 1 drama directed by Kosinski and produced by Jerry Bruckheimer and racing legend Lewis Hamilton. It’s going to be another massive movie.

“There is wiggle room,” Miranda admitted. “Sometimes you have 25 camera crews and it’s all about techno cranes and crazy equipment. But on my last film, a little play called ‘Nyad’ [directed by Jimmy Chin and Elizabeth Chai Vasarhelyi], I was only on a boat with a handheld camera. It was really liberating to be able to steer the boat and just shoot.”