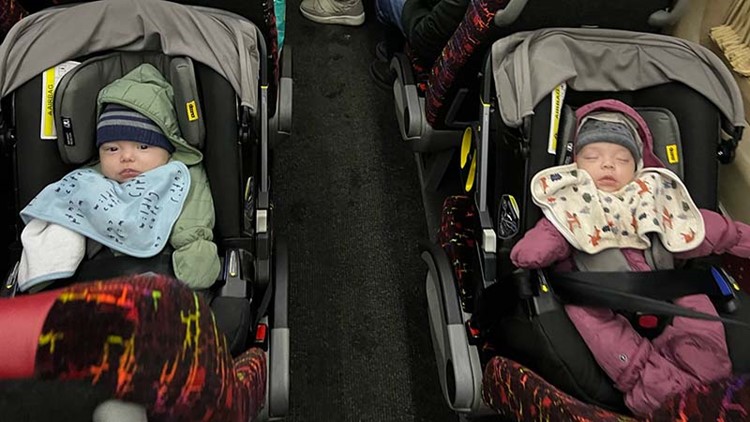 The couple used a surrogate in eastern Ukraine to carry the twins. She fled the violence to Russia and gave birth to her child there.

HOUSTON — Two babies born in September and sent to a Russian state orphanage are now in Texas with their new parents thanks to a dramatic rescue, acc Project DYNAMO.

The Texas couple, who are reportedly from the Dallas area, worked with a surrogate who lived in eastern Ukraine. Fleeing the violence there, the woman made her way to Saint Petersburg, Russia, where she gave birth to a child in early September.

Instead of handing the twins over to their parents, the hospital sent the boy and girl to a Russian orphanage. Her parents in Texas were devastated.

The family worked tirelessly to bring their babies home. US government officials showed understanding but could not help. After a few weeks, a friend from the US Diplomatic Corps suggested calling Project DYNAMO.

The first mission of its kind

The veteran-led group, based in Tampa, Fla., said it has completed “hundreds of missions in the war-torn regions of Ukraine and Afghanistan.” But they had never saved babies before. They named the mission PATHFINDER and got to work.

Projekt DYNAMO founder Bryan Stern flew to Estonia and traveled to the Russian border town of Narva. There, Project DYNAMO said they had developed a plan and organized the logistics. Within a week, on Tuesday, they successfully retrieved the babies from the orphanage and crossed the border back to safety.

The Dallas-area couple were anxiously waiting in Estonia to see their two-month-old babies.

“I’m about to meet my twins for the first time,” said the excited mother as she walked to the bus where her husband and babies were waiting.

She said they had been trying to conceive for seven years.

“Once again, the Project DYNAMO team came through when others couldn’t,” Stern said. “I’m always proud of my team, but I’m especially proud of them after we completed our first mission in Russia. If we hadn’t saved the twins, who knows what their fate and future would be or if their parents would have ever met them.”

Two #American Parents are particularly grateful for this #Thanksgiving season after #ProjectDYNAMO rescued her twin children from a #Russian government-run orphanage on Thursday, concluding the first of the organization #rescuemission within Russia. pic.twitter.com/swJdRSo30N

“Our family made whole”

The parents, who declined to be named, were on their way home from Estonia with their babies on Wednesday. They are beyond grateful to celebrate the holiday season together as a family.

“We are so grateful for the miracle project DYNAMO has done for us,” they said. “Since our babies were born, we have been incredibly frustrated and stressed trying to bring them into our home to start our family. Project DYNAMO broke through the red tape and got the job done at lightning speed. The DYNAMO project brought our family back together and we will never forget that.”

Stern is also giving thanks this holiday season after conducting dangerous missions in Ukraine and Afghanistan. The group also helped rescue people after Hurricane Ian hit parts of Florida.

Project DYNAMO was formed in 2021 following the US withdrawal from Afghanistan and focuses primarily on areas where the US government is not active for various reasons. They conducted the first air rescue operations from Afghanistan after the Taliban took control.

In July, the group rescued a Houston missionary who had been captured by the Russians in Ukraine. Terry Gateley, 63, was working at an orphanage for disabled and underprivileged children when he was taken off the streets.

He spent eight days being physically and mentally tortured.

“If someone saves you like from the situation I was in, which was death for sure, that just brings you back to life,” Gately told KHOU 11 upon returning home. “I don’t know what else to say. It’s a good feeling, really.”

Those interested in donating to or learning more about Project DYNAMO can do so by visiting www.projectdynamo.org.