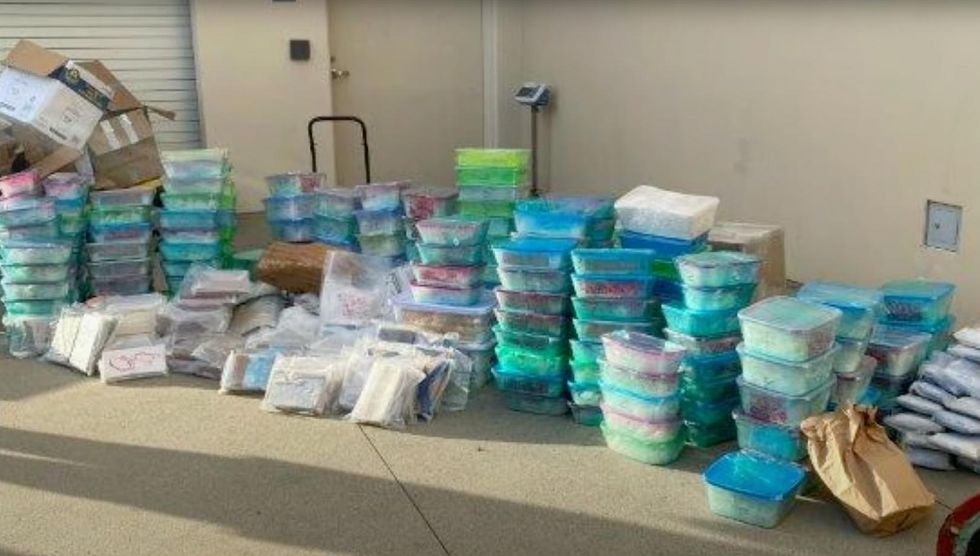 Two men are facing a string of drug offenses after they were reportedly caught in California with enough fentanyl to kill 4.7 million people – in addition to 800 pounds of methamphetamine that police discovered. CBS News reported on Friday.

Authorities say Edgar Alfonso Lamas, 36, and Carlos Raygozaparedes, 53, were arrested with the drugs in Ocean County, Calif. — the largest drug detection in the Southern California county in nearly two decades.

On March 17, police made the discovery at a Buena Park home: a whopping 821 pounds of methamphetamine, approximately 190 pounds of cocaine, and more than 20 pounds of fentanyl pills.

“Millions of unsuspecting people will have the Grim Reaper looking over their shoulders, and they have no idea how close they actually are to dying from taking a single pill. Fentanyl is cheap, easy to get, and kills our children, our co-workers, and tens of thousands of innocent Americans who don’t need to die,” Orange County District Attorney Todd Spitzer said called in a statement about the huge drug bust.

Both Lamas and Raygozaparedes have pleaded not guilty to the drug charges.

They remain in detention on $5 million bail and are due to appear in court on June 7.

On Wednesday, the US Drug Enforcement Administration released a note State and federal officials warn the drug is behind a national spike in mass overdose events.

Part of the notice, courtesy of Administrator Anne Milgram, read: “The DEA is seeing a nationwide increase in mass fentanyl-related overdoses, where three or more overdoses occur concurrently in the same location.”

“In the past two months alone, there have been at least 7 confirmed mass drug overdoses in the United States, resulting in 58 overdoses and 29 overdose deaths,” the letter continued. “Many of the victims of these mass overdose events thought they were taking cocaine but had no idea they were actually taking fentanyl.”

The notice warned all local, state, and federal law enforcement partners to contact the DEA should they experience mass drug overdoses, and warned that fentanyl is not only disguised as cocaine, but is also being cut into other drugs and sold as fake prescription drugs Pills that appear to be OxyContin, Percocet and more.

Spitzer added on Wednesday, “With fentanyl found in an estimated 40 percent of street drugs, it’s not a question of if, but when someone you know and love will die from fentanyl.” We must continue to do everything we can to fight this deadly drug epidemic and save lives.”

https://www.theblaze.com/news/two-men-arrested-with-enough-fentanyl-to-kill-4-7-million-people-it-s-easy-to-get-and-it-is-killing-our-children Two men arrested with enough fentanyl to kill 4.7 million people: ‘It’s easy to get and it’s killing our children’

Husband slammed for failing to shut down 'flirty' wife at work