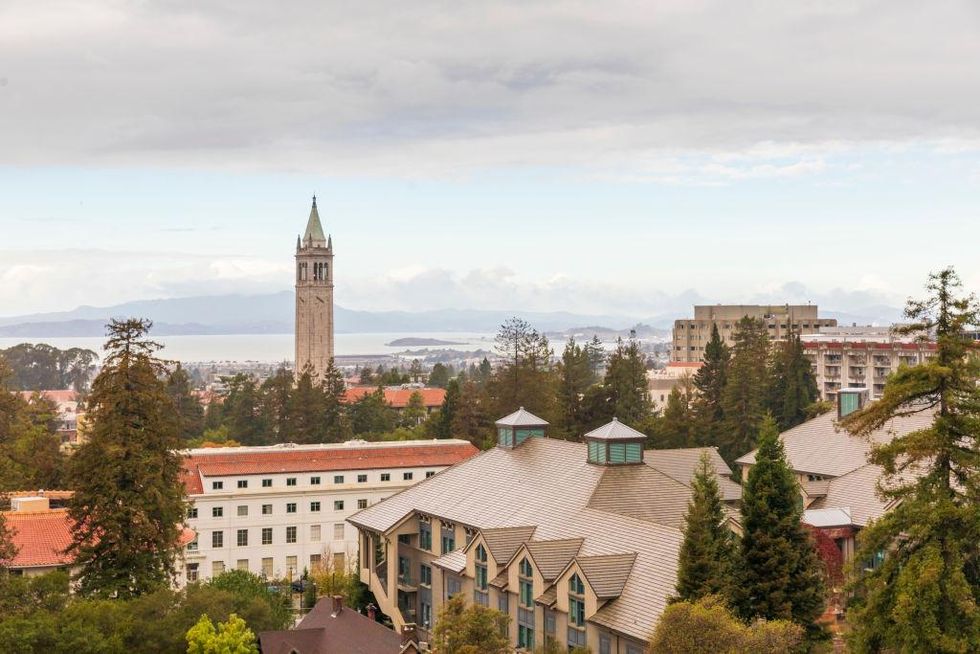 Student groups at the UC Berkeley School of Law recently changed their bylaws to “sanction” and ban speakers who support Israel or Zionism. The Jewish Journal reports that this would amount to a ban on speaking for 90% of Jewish students, and the progressive Zionist Dean of Berkeley Law, Erwin Chemerinsky.

According to the group Promoting this segregation: “Freedom of expression and the exchange of ideas cannot be romanticized…The action of affinity groups…choosing not to prevent Zionists who are either active or complicit in harming Palestinians from gaining platform in their spaces is absolutely a justifiable action.”

The nine groups supporting the changes include the Queer Caucus, the Berkeley Law Muslim Student Association, the Middle Eastern and North African Law Students Association, Women of Berkeley Law and the Womxn of Color Collective.

Promotion of anti-Semitism on campus

in one Instagram post of August 21Berkeley Law Students for Justice in Palestine (BLSJP) thanked these groups and others for “refusing to be complicit in Israeli apartheid by adopting a pro-BDS statute.”

Any group that has adopted the so-called pro-BDS statute is henceforth “committed to providing a supportive community space for all Indigenous Peoples worldwide, including movements for Palestinian liberation.”

These groups have pledged to boycott, sanction and divest funds “from institutions, organizations, corporations and any entity involved in or directly/indirectly complicit in the occupation of the Palestinian Territories and/or supporting the actions of the apartheid state of Israel .”

Explicit in that commitment is the promise “not to invite speakers who have expressed and continue to hold views or who host/sponsor/promote events in support of Zionism, the apartheid state of Israel and the occupation of Palestine.”

Although these student groups have been urged to ban speakers who have an affinity with or connection to Israel, the BLSJP emphasized its commitment to “equality and inclusion.”

The law students, who now prevent most Jews from speaking, also agreed to attend a “Palestine 101” training seminar. The seminar, last held on September 21, describes “the goals of the Palestinian liberation movement and ways in which the broader Berkeley law community can be involved.”

The group hosting the seminar has asserted elsewhere that Israel was “founded, just like the United States, by the genocide and displacement of indigenous peoples.”

in the a statement dated August 27, The Jewish Students Association at the school expressed concern about “the impact this charter is having on our Jewish community… This charter alienates many Jewish students from certain groups on campus.”

The group suggested that students “can stand up for the Palestinians and criticize Israeli policies without denying Israel’s right to exist or attacking the identities of other students.

Given that the “identity of many Jewish students is intertwined with the existence of Israel as the homeland of their ancestors,” this ordinance amounts to disparagement and exclusion.

The dean of the law school, Erwin Chemerinsky, was allegedly prompted to comment when members of Women of Berkeley Law approached him expressing great uneasiness. He said that it is “the first amendment right of students to voice their opinions on any subject,” although it’s “troubling to largely exclude a particular point of view from expression.”

Kenneth Marcus, Berkeley Law graduate and Chair of the Louis D. Brendeis Center for Human Rights Under Law, written on September 28 that the students “should be ashamed… [a]s adults who stand by silently or mutter sheepishly about freedom of speech, like university rooms, should adopt the Nazis’ notorious reputation of being judenfrei. Jew-free.”

Mark previously said that unlike previous “nonsensical political nonsense,” this latest student initiative “is different because it’s not just a political stunt.

The University of California isn’t the only academic hotbed of antisemitism in the country.

The latest report from a watchdog group Columbia University, New York University, Swathmore College, CUNY’s Brooklyn College and the University of Southern California all gave low marks for anti-Semitism in US colleges and universities. Berkeley also received an F rating. These ratings were awarded on the basis of protection, “alliance”, identity, and political action.

However, the problem is not limited to students or groups of students It was suggested that anti-Semitism will graduate with them. The New York Post reported that Nerdeen Mohsen Kiswani, a proponent of the “Intifada Revolution” and the complete annihilation of Israel, was this year’s inaugural speaker at the taxpayer-funded CUNY’s Brooklyn College.