“When in God’s name are we going to take a stand against the gun lobby?” Biden said at the White House shortly after returning from a five-day trip to Asia marked by tragedy.

CONTINUE READING: At least 20 dead, mostly children, in Texas school shooting
As First Lady Jill Biden stood by his side in the Roosevelt Room, Biden added, “I’m sick and tired. We have to take action.”

At least 18 students were killed alongside a teacher, according to a state senator who said he was briefed by law enforcement.

TIED TOGETHER: What we know about 18 children, a teacher killed in a shooting at Uvalde school

Just two days before leaving on his trip, Biden met with the families of victims after a hate gunman killed 10 black people at a grocery store in Buffalo, New York.

Successive tragedies served as a sobering reminder of the frequency and brutality of an American epidemic of mass gun violence.

“This type of mass shooting doesn’t happen anywhere else in the world,” Biden said. “Why?”

He ordered American flags to be flown at half-staff in honor of the victims in Texas by sundown Saturday.

Vice President Kamala Harris previously said that in moments like this, people usually declare, “Our hearts are breaking — but our hearts keep getting broken… and our broken hearts are nothing compared to the broken hearts of these families.”

“We must have the courage to take action … to make sure something like this never happens again,” she said.

White House press secretary Karine Jean-Pierre said Biden was briefed on the shooting by Deputy Chief of Staff Jen O’Malley-Dillon and other members of his executive team aboard Air Force One.

Shortly before landing in Washington, Biden spoke to Texas Gov. Greg Abbott from the presidential plane “to offer him any assistance he needs after the horrific shooting in Uvalde, TX,” White House communications director Kate Bedingfield tweeted. 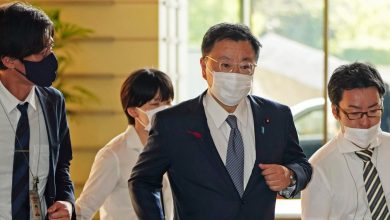