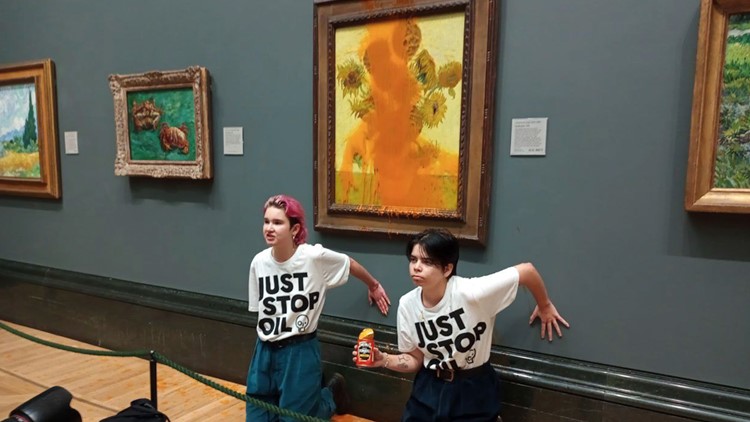 The iconic painting, protected by a glass cover, has been cleaned and returned to its place in the gallery.

Two women, aged 20 and 21, have been charged in connection with Friday’s soup-throwing protest, while a third has been charged with paint spray-sprayed on a rotating sign at the Metropolitan Police headquarters in central London. The three women pleaded not guilty during two brief hearings at Westminster Magistrates’ Court on Saturday.

Demonstrators from anti-climate change protest groups Extinction Rebellion and Just Stop Oil, who want the UK government to halt new oil and gas projects, staged a series of protests in London on Friday.

Prosecutor Ola Oyedepo said the couple did not damage the oil painting, which was covered by a protective glass sleeve, but the frame was damaged.

The painting, one of several versions of “Sunflowers” painted by Van Gogh in the late 1880s, has been cleaned and returned to its place in the National Gallery on Friday afternoon.

District Judge Tan Irkam released the women on bail on condition that they do not wear paint or glue in a public place.

Police said they had made about 28 arrests in connection with Friday’s protests and 25 others had been released on bail pending further investigation.

Just Stop Oil has drawn attention and criticism for targeting artworks in museums. In July, activists glued themselves to the frame of an early copy of Leonardo da Vinci’s The Last Supper at London’s Royal Academy of Arts and to John Constable’s The Hay Wain at the National Gallery.

Activists have also blocked bridges and crossings across London during two weeks of protests.