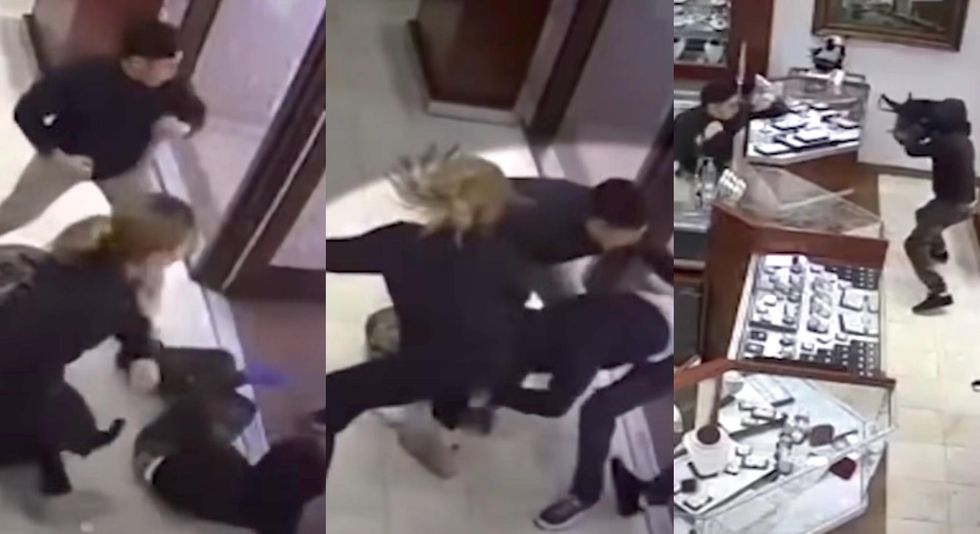 Surveillance video captured the moment employees at a California jewelry store fought off hammer-wielding attackers and fought off a robbery.

The incident happened around noon on Sunday at the Princess Bride Diamonds store in the Bella Terra mall in Huntington Beach. The shop has been owned by the Baca family for several years.

Video obtain by KTLA-TV shows that when multiple attackers run into the store with hammers to smash the display cases, staff react quickly.

Among the employees were a brother and sister who work for their father in the shop.

“We had a hunch it might happen, but it’s always different when it actually happens,” Dallas Baca said.

He added that a suspect was able to hit him with a hammer during the altercation.

“At one point while I was fighting them, one of them actually hit me on the side of my left temple with a hammer, but I didn’t even register it until they left because there was so much adrenaline going on,” he said Baca.

A woman managed to hit one of the attackers with a chair.

“I grabbed a chair and hit the one guy who was attacking Lily over the head,” Sarah Baca said, referring to another employee.

“I’m just glad everyone is okay. I’m glad our team came together and we were able to fight back and stop what happened,” she added.

Huntington Beach Police spokeswoman Jennifer Carey said the thieves were able to steal about $7,000 worth of jewelry in the incident.

Other workers at the mall said they were glad employees fought back.

“I guess they went to the store, broke a few things, but the family fought them off, so good for them, right?” said surf shop worker Kyle Sary.

Here is the video of the attempted robbery:


Employees at a jewelry store fend off an attempted break-in