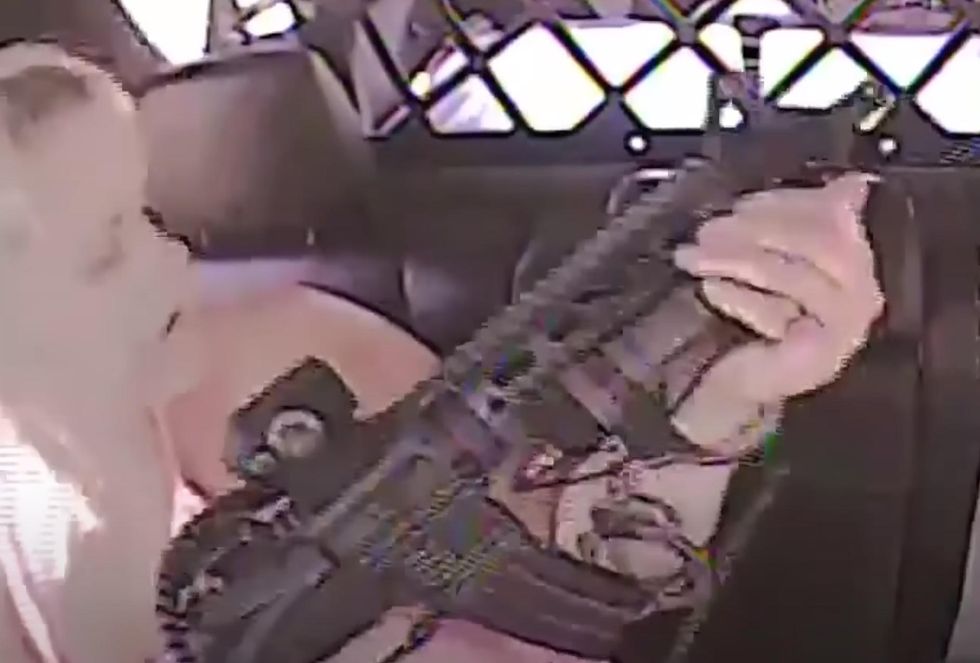 A shocking security video showed an Oklahoma woman in the back seat of a police cruiser, removing her handcuffs, grabbing an officer’s AR-15 and shooting through a car window at him and an bystander.

The Grady County Sheriff’s Office in Oklahoma said the police responded to an 911 call around 11:45 am on August 12 about a strange woman crawling on the ground barking at people.

They got 36-year-old Rachel Zion Clay into a deputy’s squad car, where she was able to slip out of the handcuffs and reach the officer’s AR-15, which was in a console labeled “Weapon.”

Video from the officer’s bodycam showed the confusion as shots rang out, hitting a bystander in the chest. They try to see where the shots came from and then hide behind another cruiser.

“She was able to figure out how to throw a cartridge in it, set it on fire, and she fired about 10 cartridges at our MPs and one civilian.” said Gary Boggess, Deputy Sheriff of Grady County.

Clay then barricaded himself in the car and the police negotiated with her for three and a half hours before finally using an armored vehicle to arrest her.

Both the officer and the passer-by were taken to hospital and treated for the injuries they sustained in the incident. The MP was discharged from hospital with non-life-threatening injuries, while the bystander’s condition was unknown.

MPs said they originally did not want to arrest the woman, just detain her before the situation escalated.

Clay was accused of shooting with intent to kill on three counts, and court documents showed she was being held on $1 million bail.

Boggess added that they would change their official procedures to prevent such an incident from happening again.

“It’s a freak deal. It’s probably one of those, I won’t say one in a million,” he explained. “But you know, it’s one of those deals you know, once it happens you go back and try to make sure it never happens again. And that’s what we’re looking at.”

Here is the shocking video:


Watch: Woman slips out of handcuffs and shoots AR-15 from police vehicle

https://www.theblaze.com/news/video-2657889363 VIDEO: Woman slips out of the handcuffs in a squad car and shoots a cop dead with his own AR-15 before an hours-long standoff