Don’t bother sealing the hatches; that doesn’t work as new episodes of yellowstone approach. A look at the full-length trailer for the oversized Season 5the Paramount Network released on the Thursday before the 8/7 premiere on Sunday, November 13, and you will know without a doubt that the storm that is brewing will devastate anything and everyone in its path. 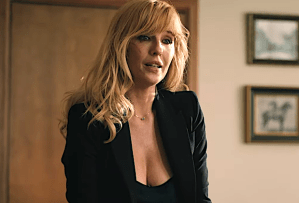 First off, John and Jamie’s fight to replace Lynelle as governor of Montana is over: the job belongs to the Dutton family patriarch, not their black sheep. And Big Daddy is making waves just as quickly as you’d expect him to. “You’re all fired,” he tells his staff, and in the same breath hires hot-headed daughter Beth as his new chief of staff. Jamie warns his sister that “they’re going to fight you dirty,” but as you might expect, she replies, “Is there another way?”

At the same time, Market Equities Bigwig Caroline is more than eager, anxious (!) to settle scores with Rip’s treacherous bride. Fed up with “that damn royal family,” the manager orders her minion (Sarah Atwood of newly hired Dawn Olivieri) “to ruin them, starting with her.” Meanwhile, Jamie, terrible as he is, warns his adoptive father that signing any particular order will be considered a declaration of war. Not that Pop cares. (Did you expect that?) “We’re already at war,” he says.

So yes, that’s how it is. To watch the trailer, just press PLAY on the video above. Then write your hopes and fears for Season 5 in the comments.

Black mamba kills the man's wife, daughter and nephew in a single attack