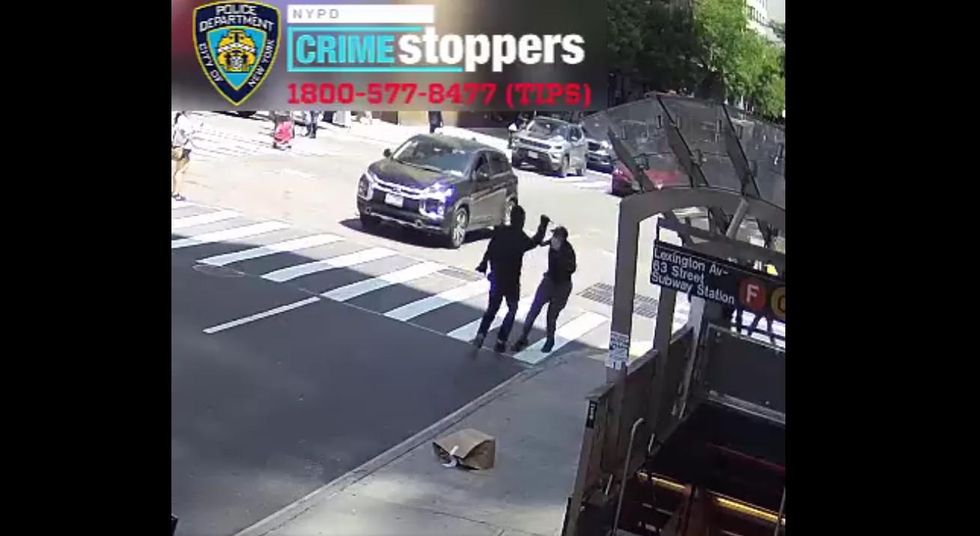 Video shared by the NYPD shows a suspect viciously slicing at a victim in an alleged random assault.

The newly released video shows the suspect approaching a male victim, pulling out a long knife and striking the unnamed 29-year-old, punching him multiple times across his back and one arm.

The victim was taken to a nearby hospital and is said to be in stable condition. The motive behind the attack is still unknown at the time of publication, and the attacker remains at large.

According to a report by
New York Postthe department said the suspect appears to be around 30 years old and is of medium build.

AMNY
divided a graphic photo with the victim’s blood staining the sidewalk.

Police have asked that anyone with information related to the suspect or the attack contact the NYPD Crime Stoppers Hotline at (800) 577-TIPS (8477) or (888) 57-PISTA (74782) for Spanish. Tipsters are encouraged to submit their information
on-line or via Twitter at @NYPDTips.

The stabbing was the second such incident in as many days.

A woman was stabbed in the leg in broad daylight on Wednesday, according to a report by the Federal Court of Justice
New York Post.

Footage obtained by the outlet showed the disturbing attack, in which the suspect – who remains at large – “repeatedly appears to stab a knife into the victim’s lower body.”

The woman then collapsed on the sidewalk.

The outlet reported that the woman was taken to a local hospital for treatment. Her condition was not known at this time.

The suspect, who was described as in his 20s, was not identified in the attack.