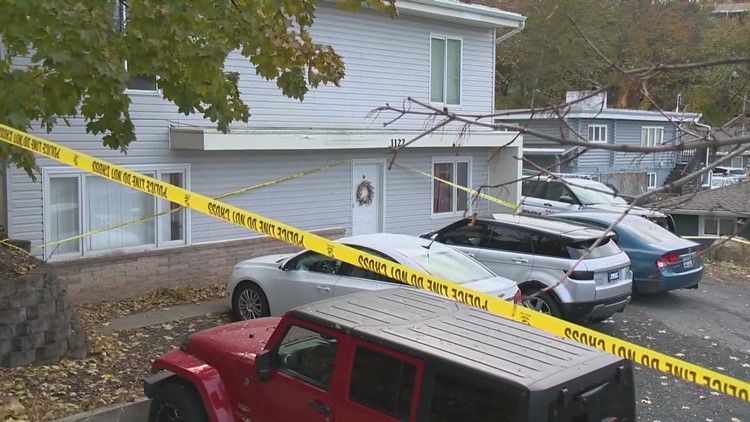 Ethan Chapin, Xana Kernodle, Madisen Mogen and Kaylee Goncalves were found dead in a home near the university campus on Sunday November 13.

MOSCOW, Idaho — Police still have no suspect in the killing of four University of Idaho students who were found dead Sunday in a home near campus, according to a news conference held Wednesday.

The Latah County Coroner Thursday confirmed that all four were stabbed and cited murder as the cause of death.

Although police have released little information, they believe the killings were targeted.

The Moscow Police Department and the University of Idaho identified the four victims as Madison Mogen, Xana Kernodle, Ethan Chapin and Kaylee Goncalves.

Here’s what we know about the investigation so far:

What the police know so far

Police say Chapin and Kernodle were at a party on campus the night before the murders, and Goncalves and Mogen were at a bar in downtown Moscow. The video also showed the two girls at a food truck on Saturday night. They got home around 1:45 am

Police confirmed the killings took place in the early hours of November 13.

Around noon, the Moscow Police Department received a call from an unconscious person at the house on King Road where the victims were found. When police arrived at the scene, they found that the four victims had been stabbed, but they have not yet found a murder weapon.

The front door of the home was undamaged and was left unlocked when police arrived, leading them to believe there was no forced entry, Moscow Police Chief James Fry said Wednesday.

Based on details at the scene, police believe the killings were an isolated, targeted attack on the victims. However, Fry declined to provide details about what information led investigators to this conclusion.

When asked why the department’s stance appeared to have changed, Fry said: “The reality is there’s still one person out there who committed four horrific, horrible crimes, so I think we’ve got to go back, it.” There’s still a threat out there, possibly, we don’t know, we don’t think it’s going to happen to anyone, but we all need to be aware of our surroundings and make sure we look out for each other.”

Fry said two other people who lived in the home were there at the time of the murders. You weren’t hurt.

There are over 25 investigators working on the case, Fry said. The Idaho State Police, the Latah County Sheriff’s Office and the FBI are assisting in the investigation.

Investigators continue to collect evidence at the crime scene. Police are asking anyone with additional information about the whereabouts of the victims from Saturday night until early Sunday morning to contact the Moscow Police Department on their tipping hotline: (208) 883-7180.

What we know about the victims

Goncalves was a 21-year-old senior from Rathdrum, Idaho, and majored in general science from the College of Letters, Arts and Social Sciences. She was a member of the Alpha Phi sorority. Her family remembers her as “tough and fair” who pushed through whatever she set her mind to.

Mogen was a 21-year-old senior from Coeur d’Alene, Idaho, majoring in Marketing from the College of Business and Economics. She was a member of the Pi Beta Phi sorority. In an Instagram post, Goncalves said Mogen was the “main character in all my childhood stories.”

Kernodle was a 20-year-old junior from Post Falls, Idaho, majoring in marketing from the College of Business and Economics. She was a member of the Pi Beta Phi sorority. In a statement to KING 5’s Spokane sister station, Kernodle’s sister said she was lucky to have them as siblings, describing them as “positive, funny and loved by everyone who met them.”

Chapin was a 20-year-old freshman from Conway, Washington, majoring in Recreation, Sports and Tourism Management at the College of Education, Health and Human Sciences. He was a member of the Sigma Chi Brotherhood. Chapin was a triplet. His parents described him as the family comedian who played every sport he could. He and Kernodle were in a relationship.

Impact on University of Idaho students

Blaine Eckles, dean of college for the University of Idaho, said the school increased security patrols on campus and students took advantage of counseling services that were made available in the wake of the killings.

University President Scott Green said students are welcome to leave campus if they wish. Green encouraged faculty to work with students who are returning home.

Due to the large number of students leaving campus, Eckles said the university postponed a candlelight vigil in honor of the four victims. The vigil was originally scheduled for Wednesday, but university staff didn’t want students to drive back to the vigil. The new date is scheduled for November 30th, with further announcements on the timing of the event to follow.