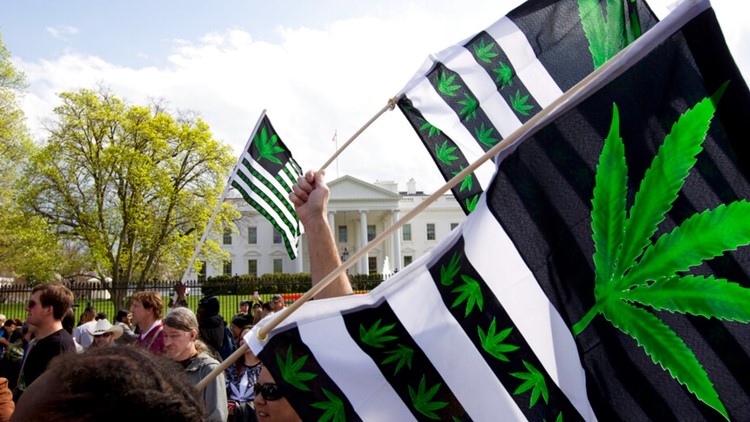 Heading into the elections, recreational marijuana was legal in 19 states, and polls showed there was opposition to relaxing legalization.

LITTLE ROCK, Ark. – Voters approved recreational marijuana in Maryland and Missouri but rejected it in two other states, signaling that support for legalization is starting to grow even in conservative parts of the country.

The results mean that 21 states have now legalized the recreational use of marijuana. Voters in Arkansas and North Dakota rejected legalization proposals in Tuesday’s elections. A similar initiative went before voters in South Dakota, but early Wednesday it was too early to call.

Proponents said the findings send a message to lawmakers in Washington about support across the country for legalization.

“A growing number of voters are recognizing that cannabis policy reform is in the best interests of public health and safety, criminal justice reform, social justice and personal liberty,” said Toi Hutchinson, President and CEO of the Marijuana Policy Project. in a statement. “Legalization successes at the state level are necessary to advance the needle at the federal level.”

Proponents of the marijuana initiatives said Biden’s announcement could give their efforts a boost.

Missouri’s measure will legalize recreational marijuana for adults 21 and older and erase records of prior arrests and convictions for nonviolent marijuana crimes other than selling to a minor or driving under the influence.

“It just goes to show that this isn’t a partisan issue,” said John Payne, who led the Missouri campaign to legalize marijuana use. “It’s something that transcends partisan divides.”

Payne said he expects recreational sales to begin in Missouri early next year.

Opponents said they would work to limit Missouri’s implementation of legalization, for example by working with cities and counties to deny dispensaries’ approval.

“The devil is in the details, and we will continue to be actively involved in implementation in Missouri because we don’t need another big tobacco industry that harms Missouri children,” said Kevin Sabet, president of SAM Action, an anti-legalization group.

According to VoteCast, a comprehensive survey of more than 90,000 voters nationwide conducted by NORC at the University of Chicago for The Associated Press, about 6 in 10 voters support legalizing recreational marijuana nationwide.

“Support for ending marijuana prohibition in the states is spreading in a similar way to the end of alcohol prohibition,” said Mason Tvert, partner at VS Strategies, a cannabis policy and public affairs firm.

The five states that voted Tuesday have legal medical marijuana programs. That includes Arkansas, which became the first state in the Bible Belt to legalize medical marijuana in 2016. The state’s dispensaries opened in 2019, and more than 91,000 patients have cards to legally purchase marijuana for medical use.

The legalization campaigns behaved about $23 million across the five states, with the vast majority in Arkansas and Missouri. More than 85% of the contributions in those two states came from donors associated with companies that own medical marijuana licenses, according to an Associated Press analysis of the campaign’s most recent financial reports.

“The marijuana industry spent millions of dollars getting itself written into the Arkansas constitution,” said Jerry Cox, executive director of the Family Council Action Committee, one of the groups opposed to the measure. “Now they know that Arkansans do not support this type of criminal policy.”

The initiative drew criticism from traditional legalization opponents, as well as some medical marijuana advocates, who said Arkansas’ proposal put too many limits and would benefit only a handful of dispensaries. Republican Gov. Asa Hutchinson, a former head of the Federal Drug Enforcement Administration, also opposed the measure.

Supporters said they planned to try again in Arkansas.

“Tonight we made history by making adult cannabis a choice for the first time. While we fell short, we look forward to continuing these efforts to build that momentum into 2024,” said Robert McLarty, campaign director for Responsible Growth Arkansas.

David Owen, who led North Dakota’s legalization effort, said he wasn’t sure further efforts would be made after the proposal was rejected.

“Tonight wasn’t what we wanted, but people have spoken and we have to prepare for the next steps,” Owen said.

North Dakota’s proposal would have allowed people ages 21 and older to legally use marijuana at home, as well as to possess and grow limited amounts of cannabis. It would also have issued guidelines regulating retail stores, growers, and other types of marijuana businesses.

South Dakotans, including a significant number of Republicans, voted to legalize marijuana possession in 2020, but that law was rejected by the state Supreme Court in part because the proposal was coupled with medical marijuana and hemp. This year, leisure pot stood for itself, how it went before the voters.

In Colorado, where recreational marijuana has been legal for nearly a decade, voters Tuesday approved a proposal that would allow marijuana use certain psychedelic substances. If approved, Colorado would be the second state to take such a step. The vote was too early to call early Wednesday.

Melody Finley, a Republican in Little Rock, Arkansas, said she voted for the state’s legalization measure because she believes it can help some people under certain conditions.

“I have a child who is now a teenager,” he said. “So I think it will happen eventually, but maybe I’ll wait until my kids are grown.”

The Definitive Guide to Cleaning Sneakers